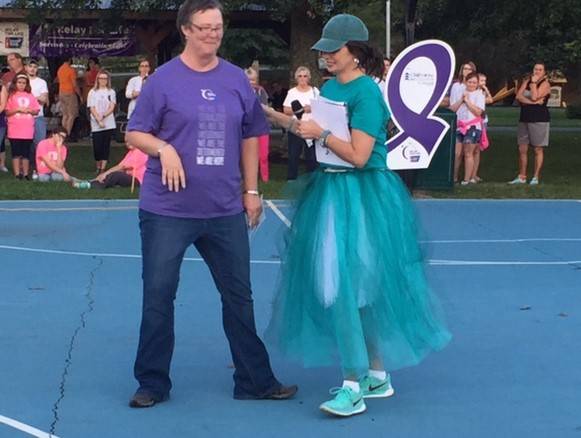 Each year’s Relay For Life welcomes a special speaker. This year, Missy Essary, right, of Tazewell, spoke of her battle with ovarian cancer. Survivor and committee member Betsy Maples introduced her.

“You have cancer” are words that no one wants to hear. However, numerous people who have heard those very words gathered Friday evening to show the community that they have won or are winning the battle against the deadly disease.

The annual Claiborne County Relay For Life was held at the Harrogate City Park with superhero-themed booths set up around the perimeter of the park.

The evening kicked off with the opening ceremony. Starting it was a prayer from Rev. Stewart Fultz, the National Anthem by Jenna Vannoy and the Pledge of Allegiance lead by Ava Herrell. The Relay For Life Leadership Team was then introduced. Event co-leaders were Amy Earl and Meagan England, logistics lead was Jamie Sweet, sponsorship lead was Michelle Huddleston, accounting leads were Sara Carmen-Lead and Jackie Massengill, luminaria and torch of hope volunteers were Michael Sanders and Jenna Vannoy, survivor co-leads were Jaymin Huddleston, Michelle Huddleston, Betsy Maples and Deb Tong and committee members were LaRee Daniels, Linda Fultz, Frances Hensley and Kathryn Love.

Missy Essary of Tazewell gave the survivor speech, speaking of her ongoing battle with ovarian cancer. She is a survivor of over four years.

Each survivor was given a superhero cape to wear and was presented a medal by Harrogate Mayor Linda Fultz and New Tazewell Mayor Jerry Beeler. Bo Williams of WATE-TV in Knoxville greeted each survivor, read their name and how many months or years they have survived the disease. Williams has been part of the Claiborne County event for approximately ten years, he said.

Relay For Life teams are challenged with raising money to go to the American Cancer Society, which uses the funds for research and more. Teams have activities throughout the year to raise money and some then set up at the Relay to sell food, crafts or other items.

As of Monday morning, the preliminary total raised was over $45,000, according to Earl and England. Many more donations are expected to come in, and donations will be accepted until Oct. 12.

“We will have an awards night on Nov. 2 to recognize top teams in various categories, spirit awards and fundraising categories,” said England.

For more information about how to become part of the next Relay For Life, contact any committee member.

For more photos of the event, visit www.claiborneprogress.net.