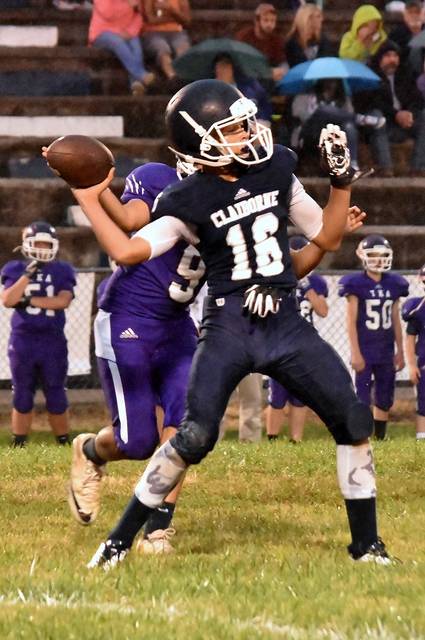 Logan Daniels shined on both offense and defense.

The Claiborne Middle School football team welcomed the King’s Academy onto R.O. Giles Field for a non-divisional game Sept. 14. The two teams knew little of each other at kickoff, making it a match-up of unknowns. The two teams squared off like two prized fighters during the opening quarter and they finished it scoreless.

The Lions quickly scored to make it 14-8. They drove the ball right down the heart of the Claiborne defense but the Bulldogs still had time remaining on the clock and began a drive that ended suddenly on an interception. The half ended 14-8 with the home team leading but the visiting Lions were playing great. The rain started to fall just before the half was over and there was a steady shower awaiting the teams when they came out of the locker rooms.

The Bulldogs kicked off to start the third quarter. The Lions went three QB runs up the middle and then got a break when the Bulldogs were flagged for an off sides. QB Tipton kept running up the middle and scored at 4:45. After the conversion was good the Lions led for the first time in the game 16-14.

After the kickoff the Lions’ defense adjusted but didn’t stop Daniels on offense as he ran 73 yards for the score. The two point conversion was good and the Bulldogs led again at 22-16.

The Bulldogs then went for and missed on an onside kick that gave the Lions good field position. On a second down, they ran down the sideline for a first down and kept going that way on offense because Claiborne wasn’t stopping it. The Lions were in the red zone with less than a minute remaining in the third and after the clock counted down the Bulldogs held a fragile lead at 22-16. They scored but the conversion attempt failed and once again the fans were watching a tie football game at 22 with 7:27 remaining.

Daniels was fighting off leg cramps but somehow still returned the kickoff 73 yards to help his team take back the lead. The conversion was completed on a pass from Daniels to Isaac Lester. With 7:10 left it was time for the Lions to respond. Back to back fumbles and recoveries had the Lions with a fourth and long that they didn’t make turning it over on downs to CMS with 3:57 remaining.

Daniels saved the offense from a bad snap and went for a first down but it was erased by block in the back penalty. Walker Ray helped the Bulldogs run the clock and Green got the next rush but there was little to no gain. At the 2:15 mark, Daniels and Lester just missed connecting through the air and down the sideline forcing a fourth and nine. Daniels got a good read on the defensive but fell short of the yard to make giving the Lions the ball with 1:57 left. Daniels completed his big game by stepping in front of a Lions pass and picking it off.

The Bulldogs defense tried running the clock out and had a fourth and two with 35 seconds left. They got the Lions to jump and was awarded a first and ten to run the victory play and win 30-22. The Bulldogs were tested by a very good Lions team and survived to move to 4-0 on the season.