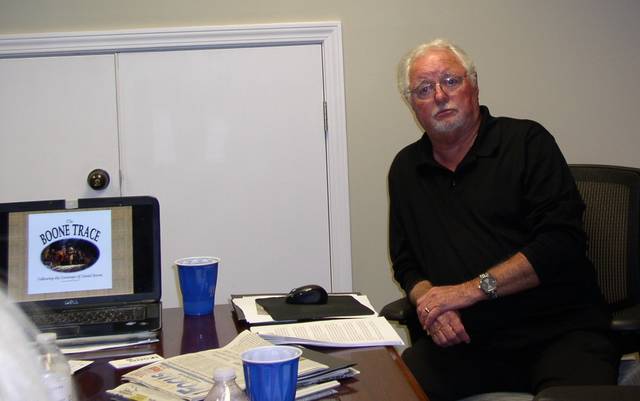 The passage of frontiersman Daniel Boone through the gap of the Cumberland Mountain in 1775 will be given a 21st century twist via the use of a virtual reality tour.

Sam Compton, president of The Boone Society, met last week with members of the Cumberland Gap Region Tourism Association (CGRTA) to discuss the ongoing proposal to create a memorial park in downtown Middlesboro to honor the intrepid wanderer. While there, Compton discussed his most recent plans to create a way for tourists to enjoy learning even more about Boone’s travels with modern technology.

Boone’s famous wilderness adventure, over 140 years ago, was made using his impressive human directional instincts. Tourists following the original Boone Trace will simply scan a couple of bar codes on the back of a brochure to pull up a virtual tour guide.

“The Boone Trace Corridor is a project of the Boone Society, working with Kentucky partnerships, to develop a living classroom from Martin’s Station, in Virginia, to Fort Boonesborough, Kentucky. It is a drive-yourself tourism venue to travel the footsteps of Daniel Boone as he led the first settlers out of the colonies and into the wilderness of Kentucky,” said Compton.

There are a series of interpretive centers along the route that tell of the westward movement during the 1700s. These centers are located at historical sites, state park welcome and county tourism centers, he said.

“The traveler will be guided by a full-color, map fold brochure and digital technology. GPS backing will take them from their location to the starting point on the full route,” said Compton.

Each location, he said, will have an interpretive wall that details the historical significance of that particular locality.

“On the back of the brochure will be two QR bar codes. They take their cellphone and scan the first bar code and it will show a two-minute video presentation by a frontiersman. He will give an overview of the interpretive centers.

“What the narrator is going to say is, ‘folks, if you’re heading northbound, this is just a little detour off of it.’ You can convince them that this side trip would not be an inconvenience,” said Compton.

When the tourist scans the second bar code, a GPS map comes up showing their present location and the direct route to Martin’s Station – no matter where the tourist currently is located across the country, he said.

The metal interpretive signage at each site is somewhat limited. The virtual reality tour guide, however, can give a much more expansive interpretation of each location.

“Let’s say Daniel Boone had leaned on a tree, somewhere. We will have an interpretive sign beside that tree. When you walk up to that tree, the tourist will be able to scan the bar code on that sign and hold their cellphone up, and it will give them a two to three minute presentation by that same frontiersman.

“When it comes up, that tour guide will be standing right in that same background, because we’ll film it on that site. And, if he says, ‘you see that big tree up on that hill?’ That tourist will say, ‘yea,’” said Compton.

The Boone Society hopes, he says, to generate cross-promotion of the various tourism sites and welcome centers inside the counties through which the Boone Trace winds. To that end, the Society is partnering with the CGRTA, he said.

“The Cumberland Gap area is a day trip. They go there and realize Martin’s Station is nearby. And, poor old Middlesboro gets zero. They come out of both of those venues and head right up 25E headed somewhere, and never even buy food or gas or stay in a motel.

“We can change it from being a day trip to a destination vacation. This is probably the same place as Gatlinburg started. Look at the tourism traffic they have now. You have to start somewhere and work toward it,” said Compton.

One way to entice tourists to stop in Middlesboro, he said, is the current proposal to create the Boone Memorial Park on some two and one-half acres of land being used now for pitching horseshoes.

The park would be a quiet area with benches, shrubbery and interpretive panels that tell the story of westward expansion during the frontier era – a place where students can learn about their ancestors within a living classroom, of sorts.

The Boone Society, the Region Tourism Association and the Middlesboro Historical Society are working together to bring about the park. Included in the plans is the erection of a 13-foot bronze statue to be created by popular sculptor Wayne Hyde. The sculptor will use as his inspiration the famous painting done by David Wright that depicts Boone moving northward across the Gap.

The project will require some serious donations from corporations and the public. Paver bricks will also be sold to raise the funds.

To do everything the project calls for, the organizations will need to raise about $100,000. However, the proposal is broken down into three tiers. The first $20,000 will create the actual park. The second tier will add the placement of a granite stone with inscription.

Money from the last tier will allow the creation and placement of the bronze statue.

For more information, or to donate to the cause, email Compton at samcomptons@cs.com or dial 615-406-6504. You may also log onto the Boone Trace website at: www.boonesociety.org.

The Boone Society and the CGRTA are nonprofit organizations.

The Cumberland Gap Region Tourism Association covers ten counties within a three state area. Those counties are Claiborne, Campbell, Union, Hancock and Grainger in Tennessee, Bell, Harlan, Knox and Whitley in Kentucky, and Lee in Virginia.

The Boone Society is based in Nashville.