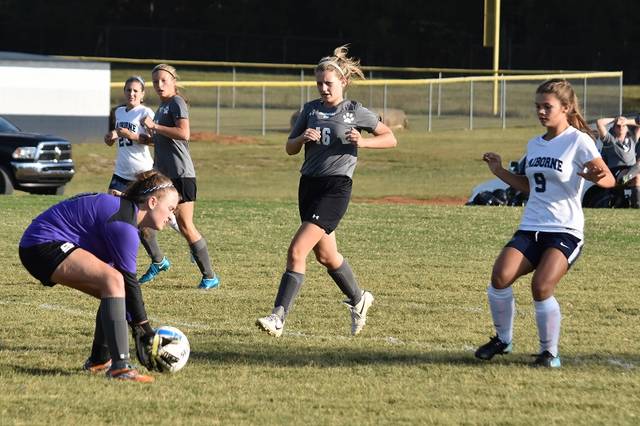 Tabitha Roy gets a stop on this Macie Sumner shot.

Soccer fans were treated with two games of rivalry soccer at Claiborne High School September 26 as the Cumberland Gap middle and high schools made the short trip over the river.

The middle school teams opened up the soccer action and the Lady Panthers were all over the pitch winning handily 4-0. They were just a sample of what was to come as the two high school programs battled for the second time this season.

Claiborne has been narrowing the gap or the advantage that the Lady Panthers have held since the two programs began a few years ago but it was yet to be determined if the Lady Bulldogs could pull off the upset.

The Lady Bulldogs needed to play fast and physical according to coach Jeff Sorke and they did play a physical style of soccer. They also started fast when Macie Sumner scored the initial goal of the contest at the 37:19 mark.

Cumberland Gap responded as Chantel Davis found the net with their first goal at 35:34 to tie the contest. The Lady Panthers played on the Claiborne side predominantly during the first half and by doing so Riley Collett scored at the 20:57 mark. Ciara Goins and Jesee Kimbrough recorded additional goals for the visitors before the first half came to an end to lead 4-1.

For the Panthers, two goals were scored by Riley Collett. Davis had one goal and one assist as did Goins and Kimbrough. Tabitha Roy finished in goal with two saves while her teammate Allison McCorkel entered the game and saved three shots.

Claiborne recorded two goals by Macie Sumner and Taylor Chittum. Ruthie Grace Sorke and Sumner had assists while Courtney Daniels had 13 saves between the posts.

Cumberland Gap head coach Lorri Kimbrough said following the game, “We played great but my true star this game had to be Alyssa Pierce. She is super fast and led our defense in shutting down the Bulldogs break aways and attacks.”