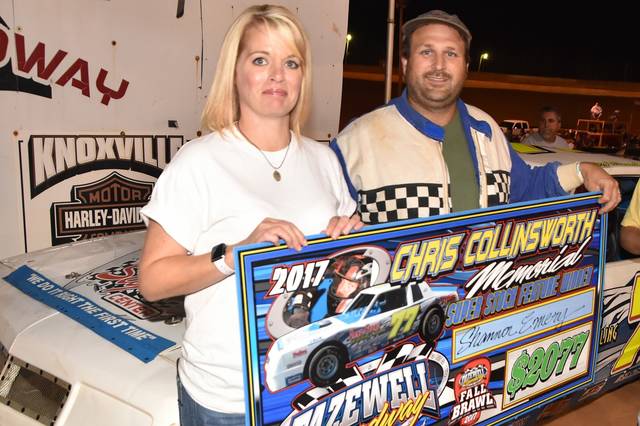 It’s been over six years since the local racing community lost one of its most loved racers. Chris Collinsworth drove his #77 into the memories and hearts of race fans at Tazewell Speedway and left a mark that could never be erased.

Each year the speedway holds a special event in his memory and this year it was in the form of the Fall Brawl, Chris Collinsworth Memorial.

Collinsworth’s car was placed on victory lane for all to see before the racing action began and what started out as a winning purse of just over a thousand dollars blossomed quickly into $2,077 as a tribute to Collinsworth. Many businesses and fans donated money to raise the purse and to increase payout throughout the top finishers. The outpouring was a surprise to Anora Collinsworth, Chris’ widow, along with his mother, Sherlon Poore Collinsworth.

When asked how she felt about the generosity Anora said, “It’s really great to see everyone stepping up to remember Chris. It’s everyone’s wish that when a loved one is lost that family and friends never let his memory fade and that’s what we see here. We see all these people wanting to keep his memory alive and it brings joy to our hearts.”

Chris’s former teammate Robbie Buchanan led early but left due to mechanical issues as did Brad Davis who was also a close friend to Chris. Also leading laps were Kurt Owens and Shannon Emery who eventually took the checkers and the $2,077 pay check. It was an exciting race that the fans stood up to watch.

After the race was over Anora Collinsworth presented Emery with the Chris Collinsworth Memorial trophy and check.