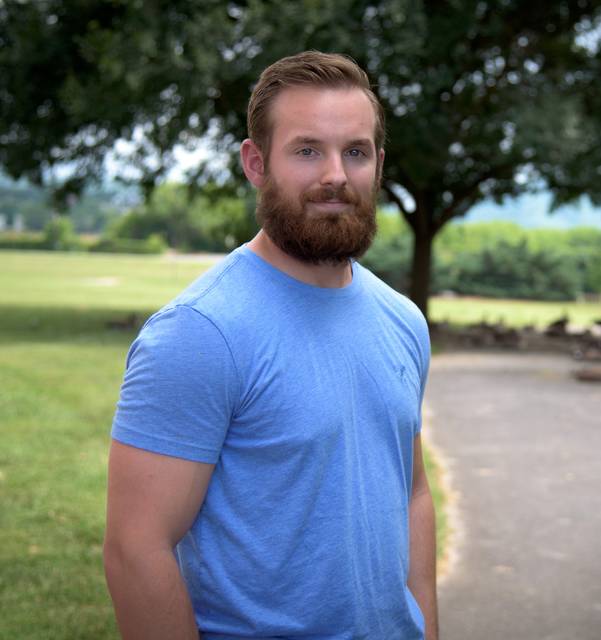 Cody Brown is a student at Walters State Community College after serving in the Marine Corps. He urges all veterans to use their benefits sooner, rather than later.

With a combat tour in Afghanistan and a deployment training foreign soldiers, Cody Brown is a great example of those celebrated on Veterans Day, Nov. 11. And like most veterans, he’s not eager to share his experiences. He shakes his head at the title of “hero.”

Brown would rather talk about his future than his past.

When his time in the Marine Corps ended, he knew what he wanted to do and he turned to Walters State for the needed training. The titles he relishes are husband, father and student.

Brown suffered a fairly serious (and painful) back injury during a deployment. He finished the deployment and sought help when he returned to his base at Camp Pendleton, California.

“I never realized how a small, corrective exercise can have a big impact on your recovery and your quality of life. I’ve played sports all my life, but I never realized the impact of therapy. As I continued therapy, my pain lessened every day and I was able to get back into my daily life,” he recalls.

Brown was fascinated by the process and considered becoming a physical therapist. He did some research and talked to professionals.

“I realized that with a physical therapist assistant degree, I could get in the field quicker and still make a decent wage,” Brown said.

He had a few prerequisites to take and is now in the first semester of the competitive program. While doing his observation hours before being admitted, he landed a job working as a physical therapy tech.

“I’m learning about how an outpatient clinic works while learning the science at Walters State.”

Brown is attending Walters State under the Post 9/11 G.I. Bill.

“I’m going to school for free. I will be able to have my income without worrying about student debt. And it’s easy to come here as a veteran. I have had nothing but good experiences. You can work and go to school and still have a comfortable living,” Brown said.

His advice to other veterans?

“The sooner you start, the better. Even if you don’t know exactly what your major is, get started. Think about what you enjoy, not just the income. Pick your passion and the money will follow,” Brown said.

Carol Powell, the college’s veterans service advisor, has another reason for veterans to start sooner rather than later: the clock is ticking.

“Depending on the educational chapter, your time to use your educational benefits are limited. Montgomery G.I. Bill benefits are available for ten years, while Post-9/11 benefits can be used for 15 years. Those are dated from your expiration-term-of-service (ETS) dates,” said Powell, a retired lieutenant colonel.

Powell said a new “Forever G.I. Bill” will remove the expiration dates for veterans who left the military after Jan. 1, 2013. The law also provides extra benefits for students entering certain fields in science, technology and engineering.

Powell said that other benefits are available in addition to military benefits and many veterans are able to come to college even after those dates.

“The new Tennessee Reconnect scholarship designed for adults will also be available to former military veterans. Veterans are also eligible for whatever aid is determined under the FAFSA and through scholarship programs, like the Tennessee Hope Lottery Scholarship and Walters State Foundation scholarships,” Powell said.

The college tries to keep red tape to a minimum and veterans may only need to meet with Powell once or twice during their academic career.

“I encourage veterans to call me if they’re interested. We can look at what particular benefits are available and what academic programs might be of interest,” Powell said.

Over 5,900 credit and 4,000 non-credit students attend Walters State. The college has campuses in Morristown, Greeneville, Sevierville and Tazewell. It offers over 100 associate degrees and technical certificates. Visit Walters State’s website at ws.edu.