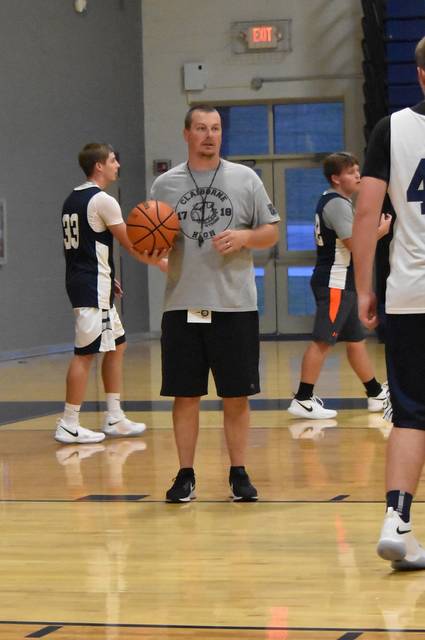 Corey McGinnis instructs the team during practice as the new head coach.

The Claiborne Bulldogs boys basketball team once again reset the program with the announcement of Corey McGinnis as head coach a few months ago. McGinnis and his assistant Andrew McGinnis are excited about the upcoming season. Although the football players are just joining the team on the hardwood, McGinnis already likes what he sees in the film room and on the court.

“I watched a lot of film on these players even before I took the job and I saw that these kids have talent.” McGinnis said. “The football players joining the team are going to improve us overall. I know what they are capable of doing.”

The Bulldogs have 22 players coming out with only four seniors and one junior so the rest of the team is young and that’s exactly what coach McGinnis likes to see.

The infusion of youth with experienced seniors will allow them to play fast on offense, get defensive stops and push the ball up the floor. When the ball can not be pushed up the floor the Bulldogs will work to get players open by using smart, solid screens.

Coach McGinnis will rely heavily on Elijah Beason, Ty Stone and Houston Hatfield to do the bulk of the scoring with Cade Beeler ready to give them a rest when needed.

When it comes to rebounding the Bulldogs hope to rely on Hunter Rosenbalm, Hatfield, Jacob Williams and Ty Stone.

When it comes to needing a big three at the end of the game Coach McGinnis will look at Beason, Beeler and Lucas Manning but he also says there’s more players capable of stepping up and knocking down the clutch three.

When asked what his players needed during practices he said, “I am fortunate to not have to coach effort. Sometimes a new coach has to address this but I have players who are self motivating and are very well sound fundamentally. I’m not saying our players are selfish but they just need a little help becoming more oriented towards the overall team aspect of basketball.”

The 2017-18 Bulldogs will look to improve on last season and have a realistic goal of winning half or more of their games and doing well in district play and possibly reaching the regional round of the post season.

Practices are very fast paced with the emphasis on learning and making solid decisions on the court. Pushing the pace is an obvious thing fans will see out of this team.

The Bulldogs will play Northview in the Hall of Fame game Nov. 17 and will host rival Union County Nov. 28.

If the mix of youth and experience will gel just right these Bulldogs will surprise a few teams as the season progresses.