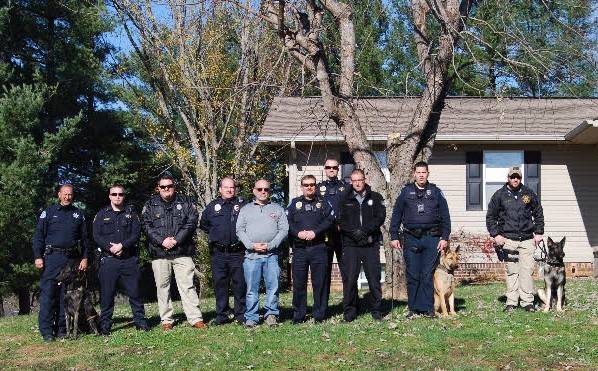 One local manufacturer recently received assistance from local law enforcement in order to crack down on illegal drugs on its property.

“A joint law enforcement coalition was formed by the New Tazewell Police Department in an effort to create a drug-free, safe working environment at Homesteader, located in New Tazewell,” he said.

Three K-9 officers were dispatched as well as other officers — the second time a K-9 has been there, he added.

Because of the number of K-9 officers in use, the violators were “hit” at least two times each, he said. The K-9s scoured the parking lot as well as the inside of the facilities.

A drug-free workplace is a goal of many employers.

According to the Tennessee Department of Labor & Workforce Development website, “Worksites where workers are not impaired by drugs and alcohol are safer worksites and can operate in an enhanced competitive position that is free from the costs, delays and tragedies that accompany workplace accidents resulting from substance abuse related injuries.”

In addition, the website states that “…substance abuse in the workplace has a real impact on their bottom line. Substance abuse drains more than $100 billion from American businesses every year in:

Absenteeism: Substance abusers are 2.5 times more likely to be absent eight or more days a year.

Employee turnover: It costs a business an average of $7,000 to replace a salaried worker.”

The NTPD and other law enforcement agencies are eager to assist employers when possible.