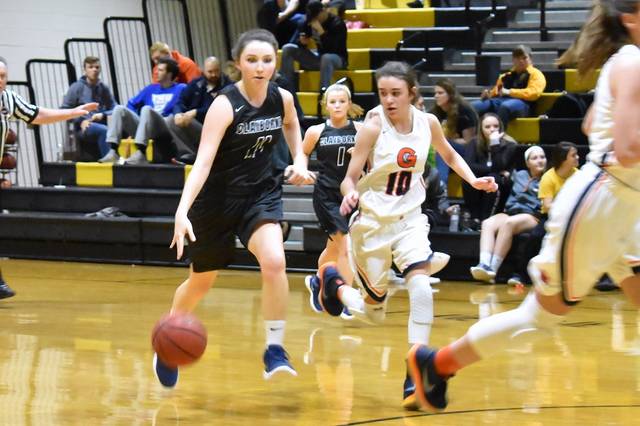 Senior Abby Ferguson led her Lady Bulldogs in scoring during her final game with CHS.

Claiborne High School’s Lady Bulldogs had a big task in front of them during the second round of the Blue Ridge Athletic Conference, District 2AA basketball tournament. They played the Grainger County Lady Grizzlies and it was 15-0 before the Lady Bulldogs got points on the board.

The Lady Grizzlies went on a mad run and in the blink of an eye the Lady Bulldogs were down 32-3. CHS was stunned by being down 29 points after one period of play but needed to give out effort regardless of the score. Abby Ferguson and Kaylee Cox were the Lady Bulldogs providing scores. The Grainger scoring slowed down during the second period but with two minutes left in the first half they held a 32 point lead. The score at the half was 44-7.

Jaden Thompson got the Lady Bulldogs’ first points of the second half with a basket down low but Grainger answered with a three. The Lady Grizzlies finished the third period leading by 50 at 59-9. The fourth period was fast due to a non-stop clock but Grainger was still scoring efficiently and finished the game with a convincing victory at 69-13. Leading the Lady Bulldogs in scoring was Abby Ferguson with six points while Kaylee Cox finished with five. Rounding out the total was Jaden Thompson with two points. Leading all scorers during the game was Lady Grizzlies’ Tori Rutherford with 11 but every player in the Grainger book recorded scores.

With the loss, the CHS Lady Bulldogs were eliminated from the district tournament and their season ended.