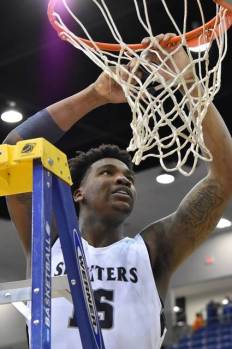 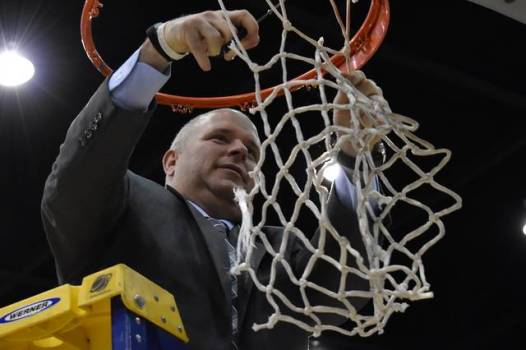 <p>2018 SAC Coach of the Year Josh Schertz cuts down the regular season net and a few days later cut down the SAC Tournament net.</p>

For a decade now, the LMU Railsplitters men’s basketball program has been a model of excellence. Since Josh Schertz’s arrival in 2008 the program has never had to be rebuilt, only reloaded on a yearly basis. This season has been no exception. The Railsplitters have lost only once during the regular season and not since. They again won the regular season title and moved on to South Atlantic Conference post season tournament play.

Schertz’s team earned a first round home game against what used to be their number one rival Anderson. Anderson has not had the year that was expected of their teams but came into Harrogate as a team to watch due to the past battles between the two schools. The Railsplitters jumped ahead early and led at the half 50-19. LMU gave the bulk of the work to the bench during the second half and they cruised to a 90-62 victory led by Dorian Pinson and his 19 points.

It was on to Greenville for second round action as they did battle with the Bulldogs of Wingate. A 29-16 first half effort gave the Railsplitters momentum to also outscore Wingate during the second half 47-30 and roll on out to a 76-46 victory. Trevon Shaw led LMU in scoring with 15. That win sent them into the SAC championship game against Queens.

Fans didn’t really know what to expect during the Sunday afternoon championship game but expected a fight from the Royals.

Queens actually jumped ahead and led at the half by five points, 41-36. In a game that featured only two lead changes and three ties LMU struggled to stay ahead late. Pinson willed the ‘Splitters to victory with 31 points and eight boards. LMU won by two points 77-75. Kamaran Calhoun dropped in 19 points and Cornelius Taylor stepped up big with 16 points.

With the SAC championship in their pocket it is expected that LMU will host the NCAA D2 Southeast Regional beginning March 10. It was LMU’s fourth SAC tournament title and Josh Schertz was named Coach of the Year. Emanuel Terry and Trevon Shaw were named First Team All-SAC team members. The win also represented the 30th win making it four years in a row LMU has accomplished this rare feat.

Their hope is to finish in the National Championship game held at the Sanford Pentagon in Sioux Falls, South Dakota.