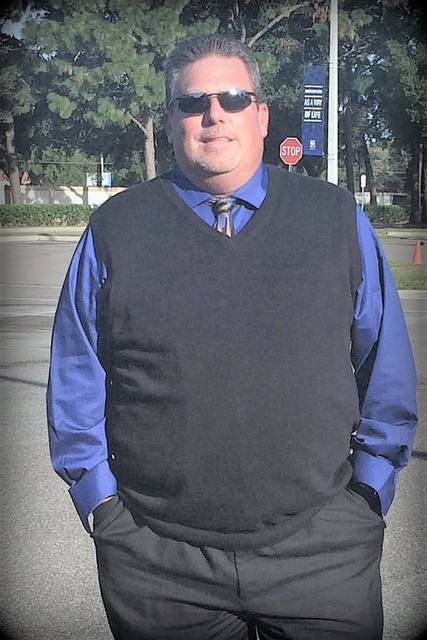 Mike Grimm is a solid team member at the Claiborne Progress and his efforts as an advertising salesman is a major part of what keeps the paper successful.

Grimm is from Central Florida and he found the American dream as a 13-year-old when he formed and operated a lawn maintenance business. He used the earnings to pay for college at the University of Central Florida, graduating in 1995 with a bachelor’s degree in business administration and he also earned recognition from Phi Theta Kappa Honor Society.

On his way to Claiborne County, he worked as a salesman and territory manager at Better-Bilt Windows & Doors, Silverline Windows and Doors which was the largest vinyl window manufacturer at the time.

In 2002, he worked for Kawasaki Motors Corporation and four years later purchased a 34-unit mobile home park in Cocoa, Florida. He was the owner and operator of the park until late 2009 and then made the move to Tazewell.

He later transferred to the Claiborne Progress and has enjoyed his time here by meeting and getting to know others while out doing his job.

“I have met some of the nicest business owners, employees and people I have ever known,” he said. “I have thoroughly enjoyed the time I have spent getting to know the residents of this community and the surrounding areas.”

“This is just another example of where my needs were met just in God’s timing,” he added.

Grimm is active in the community in several ways away from the office. He has been very involved in the New Tazewell Little League. He has served as a volunteer on the board of directors for seven years and has served as both coach and assistant.

Grimm has a wonderful family which includes children Joshua and Cydny, who according to him, have voted him the Best Dad of the Year for several consecutive years.

Grimm said this about his life and how God has blessed him, “I have led a unique, challenging and interesting life growing up on the poorer side of the fence to becoming successful at an early age. I have experienced both sides of that fence. I experienced ups and downs in life from losing my parents at a young age to reaping the benefits of hard work.”

Grimm adds, “No matter where you are in life, no matter the circumstances, God will always find you if you take the time out to look for Him as well.”

Grimm holds the attitude that God will always meet your needs — sometimes at the 11th hour — but He will always be right on time.