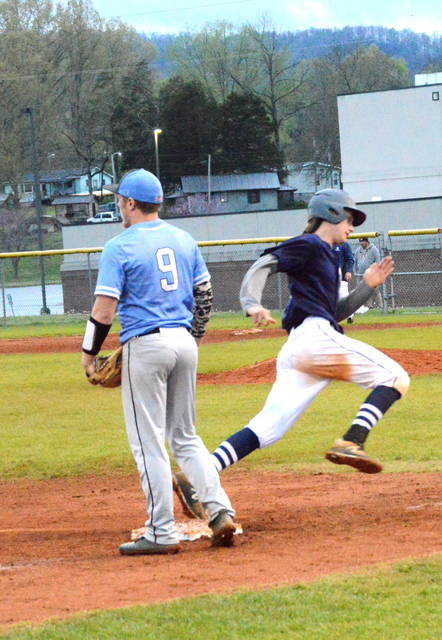 Ty Stone rounds third during a previous game against Cumberland Gap. He paced the Bulldogs’ 14-hit attack going 2-for-3 with two runs and three RBIs during Claiborne’s 17-2 victory over Bell County on Thursday.

Over the past five games, Bell County, Kentucky, High School has hit a rough patch. Unable to get the bats going, the Bobcats lost 17-2 to Claiborne last Thursday — their fourth loss in the last five games.

The Bulldogs, who have found their share of success this season, reached the 13-win mark with the victory.

Austin Cunningham picked up the win on the mound for Claiborne allowing only one run on two walks in one inning of work. Jon Werner struck out three batters and allowed four hits through two innings. Haydn Hollin closed the game allowing one run on one hit in the final inning.

For Bell County, the team tallied five hits on the night — each coming from a different batter. Antonio Zachery and Jason Jones led the way both scoring one run on one hit. Chandler Mink, Jacob Smith and Ethan Brock each tallied hits on the day as well.

Zachery was credited with the loss for the Bobcats allowing five runs on two hits and three walks through two-thirds of an inning. Jones pitched 1 2/3 innings allowing eight runs on nine hits, while Brock closed the game allowing four runs on three hits through 1 1/3 innings.