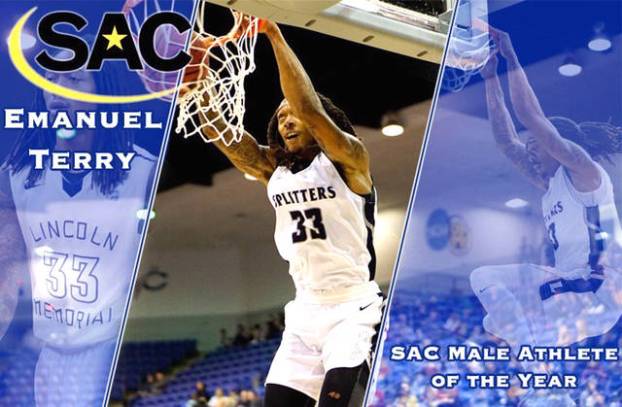 Emanuel Terry recently became the university’s first student-athlete to earn either SAC Male or Female Athlete of the Year honors since Lincoln Memorial joined the conference prior to the 2006-07 academic year.

ROCK HILL, S.C. — One final trophy has been added to Emanuel Terry’s mantel commemorating the 2017-18 campaign as the Lincoln Memorial senior forward has been named the South Atlantic Conference Male Athlete of the Year, it was announced by the league office on Tuesday.

Terry becomes the university’s first student-athlete to earn either SAC Male or Female Athlete of the Year honors since Lincoln Memorial joined the conference prior to the 2006-07 academic year. He’s also the first men’s basketball player from any SAC institution to receive the distinction since Tusculum’s Kyle Moore did so following the 2009-10 season.

“It’s certainly another well-earned accolade to complete an incredible career that will always be respected, not just because of what he did but most importantly the way he did it,” LMU head men’s basketball coach Josh Schertz said. “Emanuel would be the first person to tell you how grateful he is to have played alongside of such talented and committed teammates. He knows that individual honors in a team sport are a reflection of the group’s success, so none of this is possible if you aren’t a part of a great team.”

In addition to all of that, the Enterprise, Alabama native was lauded as the 2018 Bevo Francis Award recipient, which is given annually to the player who had the finest overall season within Small College Basketball.

Terry experienced no shortage of individual success this past season, powering the Railsplitters both offensively and defensively by putting up 16.9 points, 10.3 rebounds and 2.19 blocks per game while shooting 71 percent from the field and connecting on 70 percent of his team-leading 150 free-throw attempts.

The 6-9 forward ranked second nationally in field-goal percentage, 12th in total rebounds, 14th in total blocks, 15th in double-doubles with 16 and 20th in rebounds per game.

More importantly, Terry’s tenure with the Railsplitters marked the most successful four-year stretch in the history of the LMU men’s basketball program. From the time Terry stepped foot on campus prior to the 2014-15 season until his run ended at the close of the 2017-18 campaign, Lincoln Memorial went a remarkable 126-14 with four consecutive SAC regular-season titles, two SAC tournament championships, four 30-win seasons, four NCAA tournament berths, two Southeast Region titles and back-to-back trips to the national semifinals in 2016 and 2017.

The Railsplitters ended three of Terry’s four seasons as the No. 1 ranked team in the country and went a combined 82-4 in SAC play. That includes the only two unbeaten SAC seasons in league history.

The 2017-18 season – Terry’s final one with the Railsplitters – was yet another banner year. Lincoln Memorial compiled a 32-2 overall record with two double-digit win streaks, including a 21-game winning streak that carried the Railsplitters to their third straight Southeast Region title game.

Lincoln Memorial went 20-0 in SAC play to win their sixth consecutive regular-season title and later captured their fourth-ever SAC tournament title. The Railsplitters also hosted the Southeast Regional and ended the season ranked No. 1 nationally for the third time in four years.

“I am really proud of Emanuel,” Schertz said. “It’s easy to see what a fantastic athlete he is but what people miss about him is that he also possesses an elite work ethic and has a determination to chase greatness that’s really special. Those intrinsic qualities have driven the dramatic improvement we’ve seen from him over his career here and will continue to serve him well as he chases his dreams at the next level.”

Terry’s name is etched all over the LMU record books. In addition to being the winningest player in school and SAC history along with teammate Dorian Pinson, Terry is the program’s all-time leader in career field-goal percentage (.705) and blocked shots (228).

June 17 was finals day at Bristol Dragway for the NHRA. The champions were handed their Wallys after an exciting... read more