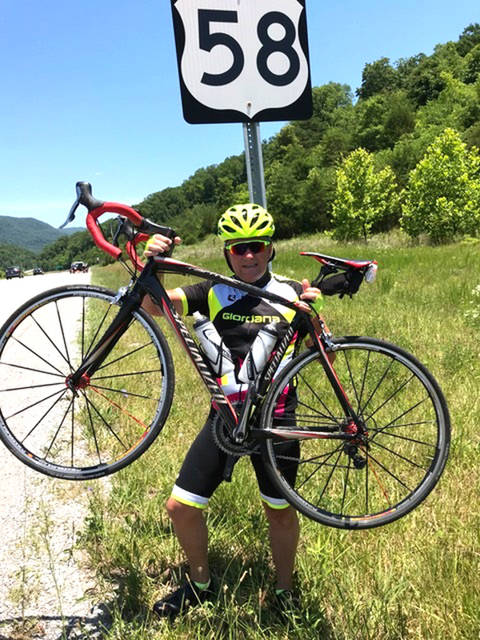 Rick Roop holds up his bike in victory after completing a 58-mile ride on U.S. 58 on his 58th birthday.

Local cyclist, Rick Roop of Harrogate, Tennessee made a decision on his 58th birthday. He wanted to ride his bike for 58 miles on U.S. 58. He completed a round trip from Cumberland Gap to Jonesville, Virginia.

Roop’s motivation for such a daunting ride was nothing more than the will and determination to set a goal and accomplish it while doing something he loved.

On a hot and humid day in mid-June, he accomplished his goal. Getting off his bike after completing the challenge, Roop held it up in celebratory pose.

“This is a monumental moment. Riding on two wheels means more than just a couple of miles riding down the highway,” said Roop. “It’s the wind blowing through your hair and the sweat running down your face. It’s your heart pounding through your chest and voices telling you that this is insane.”

Roop began cycling about five years ago and has worked diligently to get to this point.

“When I first started riding my bicycle, it was not a ride to the top of Pinnacle Road, Fonde mountain or Clingman’s Dome,” said Roop. “It was a ride around the block on a level part of the road. It might not have been as long, steep or fast as today’s ride, but it was just as important. It was a starting place to get my courage up to get me started in the right direction.”

Another part of Roop’s motivation to complete his 58 themed bike ride is to give encouragement to others. One of his personal beliefs is that overcoming challenges can a go a long way to living as healthy and prosperous a life as possible.

“To anybody out there who thinks it’s too difficult to do something like this, just remember, the first step is just as important as the next step. Ride for those who can’t, and inspire those who can,” he said.