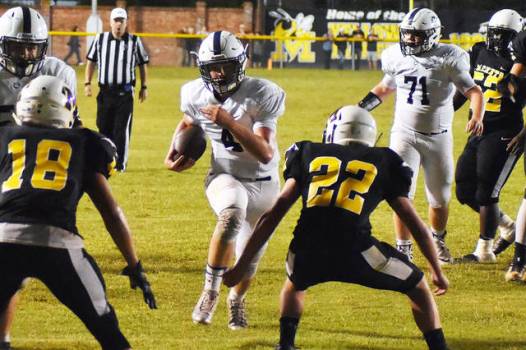 <p>Allen Earl | Claiborne Progress</p> <p>Eli Stone rallied his team during the final quarter and gave them a chance at victory by slamming into the end zone for a TD with a little more than a minute remaining in the game.</p> 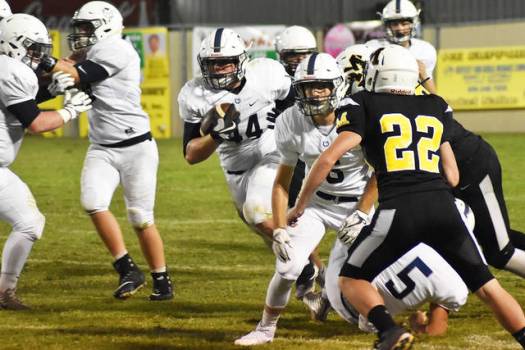 <p>Allen Earl | Claiborne Progress</p> <p>Matt Cupp came in the second half determined and used his power running to help move the ball.</p>

Claiborne High School took its football team through the tunnel to play against Middlesboro’s Jackets in a border war. The game was called the Veteran’s Bowl, and it lived up to expectations. The two teams went back and forth during the opening period, and it looked like the home team was going in for the game’s first score but instead fumbled the ball to Claiborne.

Greg Goins and Storm Livesay was doing the work and then Hadyn Hollin made a leaping catch near the goal line that had the visitors with less than a yard away from the first TD of the game; however, a fumble gave the ball back to the Jackets on the 7-yard line. Two fumbles nearly cost the Jackets, but the quarter ended and the game was a scoreless one.

After trading punts, a pitch went wild in the backfield, and the Bulldogs recovered. They couldn’t move the ball and settled for a field goal attempt that sailed wide left. The Jackets scored around 7:09 on a long run. The two-point conversion was good to give the home team an 8-0 lead.

The Bulldogs and Jackets again did not move the ball, but at 3:29, Claiborne had another shot. Stone, Hollin and Bryce Laws combined efforts to put six on the board. Laws got the corner and was shoved from behind into the end zone. The point after was blocked making the score 8-6. Claiborne had to hold the Jackets on defense and did just that. The half ended 8-6, Jackets.

The Bulldogs opened the second half with a turnover and had to rely on the defense to get a stop. Following the punt, Claiborne started using Matt Cupp and his physical running style to supplement the Bulldogs aerial attack with Hollin and Spencer Fejeran. CHS went for a first down on a fourth and 22, but a turnover created another TD for the home team. The conversion was good and the Jackets held a 16-6 lead.

Going into the final quarter the Bulldogs needed a score. It took them almost the entire quarter to get back into the end zone, but they did with just a little time remaining in the game. Stone took control of his offense and used a mix of passing and running to lead the team into the end zone with 1:11 left in the game. The conversion failed, but the Bulldogs now held a 20-16 lead and had the Jacket fans nervous.

With 1:07 left in the game the Jackets connected on a bomb that silenced the Bulldogs side of the stadium. The two-point conversion failed but the Jackets had regained the lead, 22-20. Claiborne could not answer the score before the seconds melted off the clock, and the Veteran’s Bowl trophy and victory went to Middlesboro by the final score of 22-20.

Following the game, coach Nathan Medlin understandably wanted to go immediately with his team to the locker room but later emailed his comments about the game.

“This loss is on me. The kids played hard. I have to do a better job of putting them in a position to be successful. Anytime you lose a game on the last drive or near last drive it’s tough, and it wasn’t the last throw they made that beat us. We had too many missed opportunities and didn’t take care of business on our own. Four interceptions, one fumble, missed PATs and FG, the list goes on. Bottom line, we have to learn and get better. I will have to get better, and we will be more prepared and our execution will be much better.”

The Bulldogs travel to West Greene for a rare Thursday night game, Aug. 30, and will be looking to rebound.