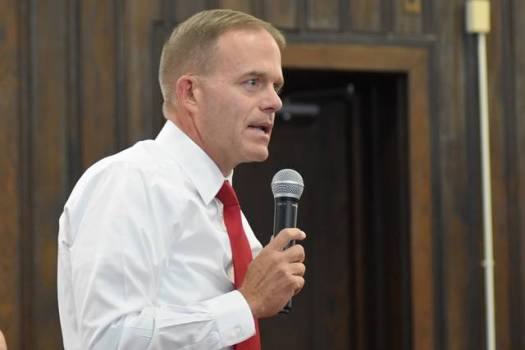 <p>Photo by Allen Earl|Claiborne Progress</p> <p>Circuit court judge John McAfee speaks of his school days spent learning and growing under the leadership of the late Carl Green, who coached the CHS Blue Devils on to many victories.</p> 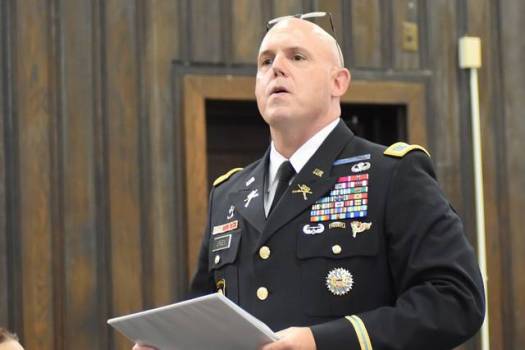 <p>Photo by Allen Earl|Claiborne Progress</p> <p>Colonel Lance Green speaks of his father, the late Carl Green, during a discussion that could net the naming of the Claiborne High School gymnasium in honor of the coach.</p>

The late Carl Green coached at Claiborne County High School for 27 total years. In his second season (1986) as head coach of the Blue Devils, the boy’s basketball team went 30-4 and won the first of its impressive 17 district titles. During 12 of those seasons, he was named the District Coach of the Year by the TSSAA. Green finished with a winning record over every team the Blue Devils faced, except one. His record of excellence is unequalled in Claiborne High School history.

Since his retirement, there have been only a handful of district championships by both Claiborne County High Schools.

Some feel that current CHS basketball players need to realize just how much Carl Green and his teams did to build a dominance. The athletic history is important to many.

Many years after he retired, a push began to have his name on the floor of the court. This never happened at the former high school. Now, many are coming together in support of making this happen on the basketball court at Claiborne High.

Many feel what coach Green did was deserving of such an honor. Many are now saying ‘why not this. Why not now?’

The Claiborne School Board discussed this issue during its Oct. 11 meeting. It wasn’t the first time this has been on the agenda. It is unclear just why previous discussions (and votes) were postponed. During the meeting last week, there were many in the audience in support of placing the Green name on the gymnasium or floor.

Circuit court judge John D. McAfee spoke to the board first and said, “I played for Coach Carl Green during his last two district titles. I didn’t know if I could play at all, but I was pushed by Carl Green. If you played for Coach Green, it was because you were good. Not because your parents had a bank account.”

McAfee also gave Green credit for being a father figure to him. The judge said he respected the coach for not only being a great leader but also a devout Christian man.

“Coach Green was like a father to me, and this is long overdue. There is no reason that this should not happen,” said McAfee of the proposal.

He then introduced Colonel Lance Green, who is one of Coach Green’s sons and former player. Colonel Green fought back tears as he told of his father’s numerous accomplishments. He detailed his insights about his father.

“I’m happy to come back home and see some of my heroes that were former players of my dad. He was always loyal to his players and his students and steadfast in his Christian faith. Coach Green was one of the winningest coaches in his district and, unlike other coaches, he was coaching only boys basketball where others coached various sports.”

The colonel also spoke about his father’s faith.

“Coach Green was very active in Tazewell Baptist Church and wanted to be more of a life teacher. Coaching wasn’t his top priority; his priority was preparing his players and students for life.

”Now, this (the renaming of the CHS gymnasium) hasn’t happened for various reasons. One is that he never coached or taught at the new high school. In fact, I spoke with the TSSAA and they said that was not an issue; that many buildings were named for someone that never coached at the school. Also, we have buildings named for people – even in this county – that never coached or taught (here) such as Ellen Myers School and others. That argument should not be considered in this case,” said Green.

Colonel Green finished his address to the board and those in attendance in this manner, “I propose we do this. Mr. Chairman – Wade Breeding. I have faith in your leadership and I thank the board for hearing my story.”

Immediately following there were many players, students and church members that spoke in favor of the proposal. Not one person voiced opposition to the plan.

The board is expected to vote on this issue during its Nov. 8 meeting.