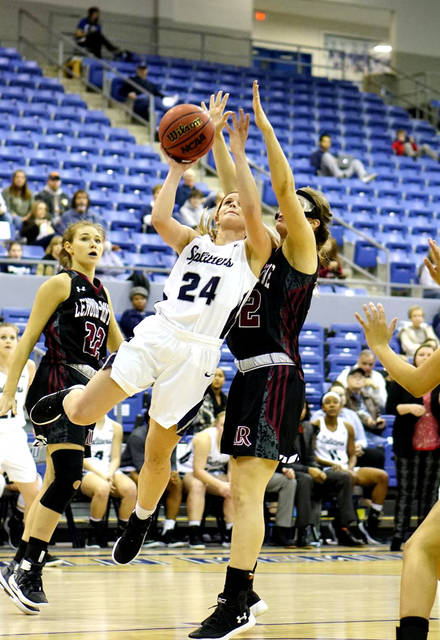 Rachel Griffith scored 23 points during LMU’s 73-62 victory over Lenoir-Rhyne on Saturday. The senior had an impressive outing as she went 8-for-11 from the field, 2-of-4 from three-point range and a perfect 5-for-5 from the free-throw line.

HARROGATE, Tenn. — Another day, another Griffith with a career-high. This time, it was Rachel Griffith, who scored 23 points to lead LMU to the 73-62 South Atlantic Conference win over Lenoir-Rhyne Saturday afternoon in the Tex Turner Arena.

The senior had an impressive outing as she went 8-for-11 from the field, 2-of-4 from three-point range and a perfect 5-for-5 from the free-throw line. She was one of three players who scored in double figures for LMU, who improved to 10-6 overall and 6-3 in the SAC with the win.

Freshman Sydney Newsome had probably her best all-around outing in the Blue and Gray as she tied her career high in points (16) and assists (5), while also flirting with a double-double as she had eight rebounds. Rachel’s twin sister Emily Griffith added in 14 points and five assists. Maggie Jachimczuk had a solid day on the boards as she pulled down 14 rebounds, tying her own season high.

LMU held a narrow 39.3 percent-32.8 percent edge in shooting from the field and a 30.0 percent – 22.7 percent advantage in three-point shooting. The Lady Railsplitters also out-rebounded the Bears 46-39 for the contest. Lenoir-Rhyne did win the battle of free throws, out-shooting LMU 86.7 percent – 84.6 percent from the charity stripe.

Neither team led by more than four points in the first quarter. After tying the game at 4-4, LMU went on a run to pull out to a 10-6 lead. A jumper by Kendall Toineeta sparked a 7-0 L-R run, giving them a 13-10 lead with less than two minutes left. LMU then went on a 6-0 run of their own, including four points by Sydney Newsome, to claim a 16-13 lead after one period.

LMU extended their lead over the second quarter to 29-18 and never allowed the Bears to get any closer than four points over the rest of the half.

Thus far this season the third quarter has been kind to LMU, and Saturday was no exception as they worked their way back to a double-digit lead that they maintained for the majority of the stanza. They led 56-46 heading into the fourth quarter.

Toineeta and sophomore Kennedy Weigt combined for 12 of L-R’s 16 points in the fourth quarter, but their efforts were not enough as they could never pull the Bears to any closer than nine points as LMU went on to claim the 73-62 victory.

The loss spoiled a brilliant performance from Toineeta, who had 25 points, including a 10-12 night at the free-throw line and five assists. Weigt chipped in 17 points, including four 3-pointers, and Madi Suddreth added in 10 points. Madeline Hardy led L-R on the boards with 12 rebounds. The Bears fall to 9-8 overall and 4-5 in the SAC with the loss.

– Emily Griffith became the 31st LMU women’s player to reach the 800-point mark for their career as she finished the evening with an even 800 points after hitting a driving layup with 35 seconds remaining.

– LMU outrebounded an opponent for the 14 time out of sixteen outings this season.

– With the win LMU moves to fourth place in the SAC standings. Anderson is first with a 9-0 record vs. SAC competition, followed by Wingate and Carson-Newman. Newberry is fifth with a 5-3 record, followed by Tusculum at 4-4.

LMU hosts local rival Tusculum in their first meeting of the season Wednesday evening. The Pioneers are 11-4 overall and 4-4 in SAC play following a 73-67 loss at Wingate earlier on Saturday.