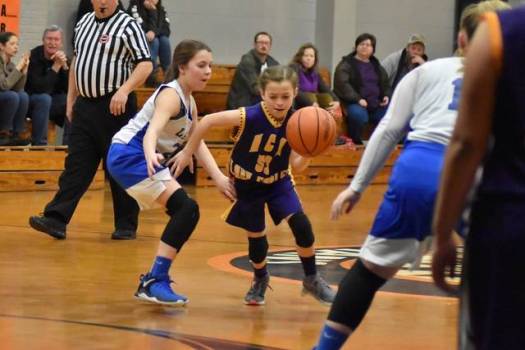 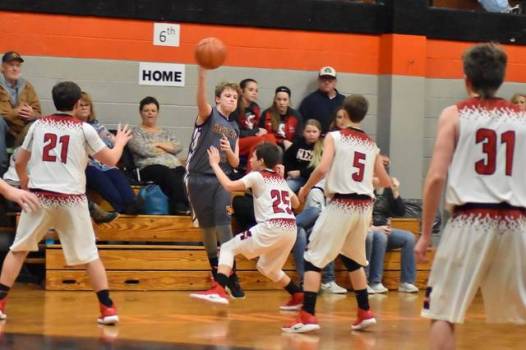 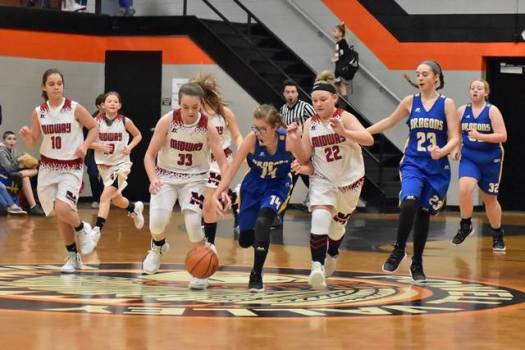 The first game of six featured Hancock and Heritage in a girls’ contest. Hancock took an 8-0 lead and led 16-0 at the end of the first period. Heritage got on the board during the second but was behind 21-1 at the half.

Heritage found the three ball during the third but it wasn’t enough to stop the Lady Indians from winning 37-14. Raegan Collins led Hancock in scoring and Cheyenne Mayes led Heritage with six. Haley Lebert scored five and Izzy Helton scored three for the Lady Eagles.

Game two featured the boys of Hancock and Forge Ridge. Hancock jumped ahead early and led 16-2 after one period. Forge Ridge shot the three ball during the second and finished the half behind 24-13. The Indians had the Dragons’ number on this day and won the game, 56-21.

The third game featured Midway and Forge Ridge in a girls’ game. The Lady Dragons scored first, but by the end of the first Midway led 10-2. The Lady Red Devils went on to win the contest 32-12. Madison Lynch led the Red Devils with 20. Emma Myatt and Izabella Cosby each had four, Tiara Warwick and Abby Hardy rounded out the scoring with two each. The Lady Dragons were led by Jayden Heck with seven, Caitlyn Michael had three and Abby Woods finished with two points.

The fourth game featured the Powell Valley Indians and Washburn Pirates. The Indians dropped in the first basket but the Pirates responded with a run that allowed them to lead after one, 9-5. The host team used the second to pull to within one but Washburn was able to stay ahead the remainder of the game to win 26-19. Caden Atkins led Washburn in scoring with 14. The Indians were led by Kaleb Powers with eight, Devin Byrd had seven, Gavin Owens had six, Jonah Ellison had four, Andy Osborne had three and Trent Jenkins finished with two.

The fifth game was Powell Valley and Washburn again this time on the girls’ side of the bracket. The Lady Indians led with 1:11 left in the first but after one they were down 10-7. The second half was a good one for the Lady Indians but it was even better for the Lady Pirates, who won by 10 at 37-27. Braylon Coffee led Wasburn with 17. Maddie Richardson led PV with seven, Emma Miracle had six, and JennaBeth Wilburn and Kayla Satkowski both had four. Three other Lady Indians — Addi Nelson, Crissa Gibson and Hailey Smallwood — had two points each.

The final game featured Midway and Heritage. The Midway boys started strong and led 16-4 after one period and 28-5 at the half. During the second half silence fell on Haze Davis Gymnasium as Korbin Hatfield was diving for a loose ball and he collided into two Eagles players. He made hard contact with the floor and the wooden bleachers. Heads bowed as he was getting attention, but Hatfield was up and talking only a few minutes later — to the relief of the many in the gym.

Midway ran away from the Eagles and won 56-15. Heritage had three players with four points each — Ryan Saylor, Cade Pike and Gabrielle Thomas. Jed Bailey also dropped in three for the Eagles. Cooper Sams was on fire for Midway, scoring 19. Jake Smith had 12, Conner Atkins had 11, Tyler Myatt had six, Tyler Holt had four and Korbin Hatfield also finished with four points.

The winners will continue play Jan. 21 as the number one seeds will have their first tournament action.