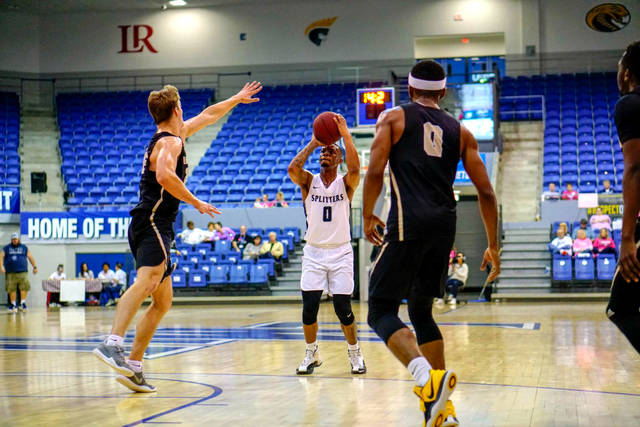 Cornelius Taylor (0) pulls up from three during a previous game. The redshirt junior finished Saturday’s game against Wingate with nine points.

WINGATE, N.C. — Lincoln Memorial redshirt-junior Cornelius Taylor buried a three-pointer as time expired to send the Railsplitters past the Wingate Bulldogs and to a 67-64 victory inside of Cuddy Arena on Saturday night.

Taylor’s heroics capped a frenzied comeback for Lincoln Memorial (16-6, 11-4 SAC), who erased a six-point halftime deficit to stun Wingate (13-10, 9-6 SAC) and beat the Bulldogs for the 15th straight time.

“That was a great job by our players of just battling for 40 minutes,” said LMU head coach Josh Schertz. “We expected it to be a difficult game and it certainly was. Wingate is a good basketball team and (head coach) Brian Good always does a great job, but we hung in there and competed for the entire game.

“Obviously we were fortunate to make one more play there at the end but I’m pleased with how our guys executed down the stretch on the offensive end.”

After a back-and-forth start to the second half, the Railsplitters found themselves trailing 47-41 with 9:30 left in regulation.

But Lincoln Memorial fought its way back into it, as a bucket from Kamaran Calhoun and threes from Julius Brown and Taylor comprised an 8-0 run that put the Railsplitters in front 49-47 just 90 seconds later.

It stayed close over the next stretch until Cameron Henry hit a three at the 5:41 mark to extend the lead to 55-51. Henry later connected on two more triples that kept Wingate at bay and pushed the Railsplitters’ lead to 58-53 and 61-56.

Yet another three by Henry – his fourth of the half – looked to put the game away once and for all, giving Lincoln Memorial a comfortable 64-58 cushion with 54 seconds to go. However, Emarius Logan finished off a three-point play and Frankie Johnson converted three free throws attempts after he was fouled with six seconds left to tie the game at 64-64.

That set up the dramatic finish, as Taylor drilled a three from the left wing as the buzzer sounded off a pass from Brown.

That shot saved an otherwise forgettable offensive performance for both Taylor and the Railsplitters. As a team, Lincoln Memorial shot 40 percent from the field, but managed to go 13-for-38 from three-point range. The Railsplitters also turned the ball over 14 times and allowed 17 offensive rebounds.

But Wingate was unable to take advantage of Lincoln Memorial’s offensive struggles, going a dreadful 21-for-67 (31.3 percent) from the field and 7-for-26 (26.9 percent) from three-point range.

Julius Brown led the Railsplitters with 17 points in 28 minutes off the bench. The true freshman went 5-for-9 from three and handed out four assists without a turnover. Henry added 14 points with eight rebounds, while Taylor collected nine points, but finished 3-for-16 from the field and 3-for-13 from long range. Calhoun contributed only five points, but grabbed a career-high 16 rebounds.

Neither team was able to get anything going offensively in an ugly first half of basketball.

The Railsplitters went just 8-for-27 from the field and turned the ball over nine times. Wingate was completely unable to capitalize, though, as they went 10-for-35 overall and 1-for-10 from three to lead just 24-23 at the break.

– The game featured 11 lead changes and seven ties while neither team led by more than six points. The three-point margin of victory was the slimmest for either team in the series since a 60-58 LMU win on January 26, 2013.

– The Bulldogs outrebounded the Railsplitters 47-42. Calhoun and Henry combined to account for 24 of LMU’s 42 boards.

– Brown’s 17 points fell just three shy of matching his career-high, as the freshman scored 20 against Virginia-Wise back on November 24.

– The Railsplitters assisted on 16 of their 25 field goals. Four different players dished out at least three assists, led by four apiece for Brown and Calhoun.

Lincoln Memorial returns to Tex Turner Arena on Wednesday to face Hiwassee for the final nonconference tune-up of the season. Tip-off is set for 7 p.m.