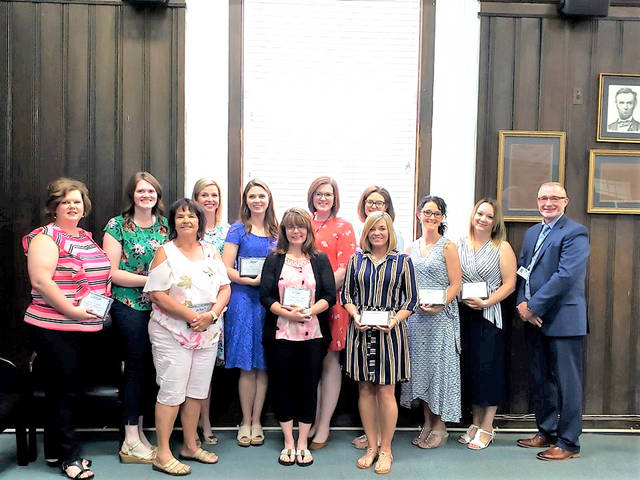 The BOE honors instructors who have gone above and beyond during the current school year. These teacher leaders have devoted their time prior to and following the regular school day as they assist others in planning, data analysis and learning new teaching strategies. Dr. Joseph Miller, director of schools, is shown with the following 12 teacher leaders who are recognized for their dedication to students, school campuses and the community: Whitney Bowling, with Cumberland Gap High; Jo-Anna Burke, with Ellen Meyers; Jonica Campbell, with Soldiers Memorial Middle School; Teresa Fuson, with The Alpha School; Jess-Anne Gilbert, with Claiborne High; Brenda Graves, with Powell Valley; Shannon Graves, with Cumberland Gap High; Kala Lawson, with H. Y. Livesay; Haley Lee, with Claiborne High; Heather Herrell, with Forge Ridge Schools; Jackie Massengill, with Midway Elementary; and Bridget Saylor, with Tazewell/New Tazewell Primary School.

Cumberland Gap High School principal Linda Keck will be sitting at the helm of the Claiborne school district as the new director of schools. Keck beat out Meredith Arnold and Trent Williams in a tight race to replace the current director, Dr. Joseph Miller, when his term expires on June 30.

The vote came down to five and two, between Keck and Arnold, who were the finalists. Williams had previously been eliminated during a committee meeting.

Keck comes to the director’s chair with quite the educational background. A Powell Valley High School graduate, Keck holds a bachelor’s of science degree from Lincoln Memorial University (LMU) and earned a master’s degree from East Tennessee State University (ETSU).

She currently holds a doctorate of educational leadership and administration from the University of the Cumberlands.

Her professional experience includes stints as a member of the adjunct faculty at Union College, principal of Clairfield Elementary, assistant professor at LMU and an instructor of education at Clinch Valley College.

Over her wide and varied career, Keck has been a graduate assistant in the Theatre Art Program at ETSU and has sat as the chair of the physical education, health and athletic training at LMU.

Although Keck was present at the school board meeting last week, she declined to speak following her election.

In other action, the board approved the list of those who will sit on the 2019 Charter School Committee. Lori Duncan, Meagan England, Rhonda Epperson, Denise Howard, Bob Oakes, Georgia Rush and Sandra Williams will work together on the program.

The board approved the contract renewal with Grace Rehabilitation to continue occupational and physical therapy services for students with disabilities. Grace Rehab was the only bid received by the school system. This is a one year contract to be in effect during the 2019-20 school year

The board also approved the contract with Access Medical Billing, Inc., who will act on behalf of the school system in obtaining reimbursement from TennCare for the costs of speech and language therapy services.

Rescue is their business