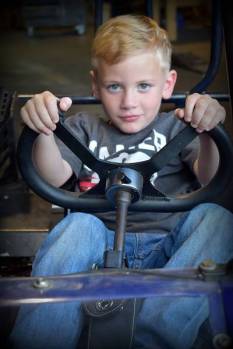 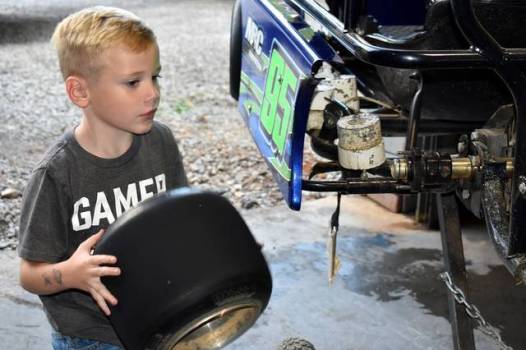 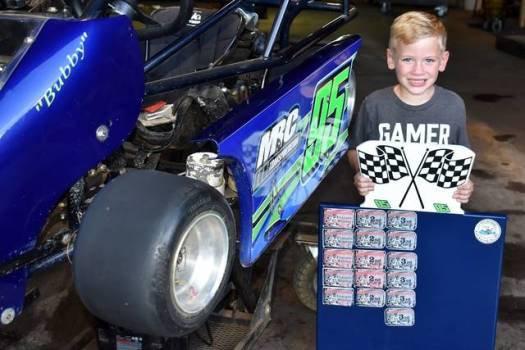 His family and friends currently call him “Bubby,” but if he continues to improve on his racing kart they’ll have to change his nickname to “Fast Freddy.”

Freddy Ahrens V, is the son of former Tazewell resident Lora Ahrens and Fred Ahrens from Bowling Green, Ky. Bubby has one sister, Teagan, who is happy to be a cheerleader and doesn’t seem to like racing enough to try it out, but her five-year-old brother is at home in his champ kart.

He began racing last year as a four-year-old running his racing machine at Ashway and Dumplin Valley. In two short years, raw talent has allowed him to get six wins, five second places and six third place finishes.

Freddy just had another life achievement by learning to ride his bike. Yes, Bubby has won all those races before learning how to ride a bicycle.

He pilots his Ultramax Inferno around in the dirt with a big number 95 on the side, a nod to the Cars movie character Lightning McQueen. Like all young boys, he enjoyed a trip to Tazewell Speedway with his dad but decided that being on the track would be more fun than standing up and watching it through the fence, so he gave racing a try and liked it.

He uses only talent right now to get him around the track quickly, but he is beginning to understand how to explain what his kart is doing and how important feedback is. His first kart was a yard kart, and he drove it so much that he literally ran the rubber off it. That’s when his parents knew that they might let him try a race or two.

Four-year-old Freddy loved it and hopes that grown up Freddy is still out there making laps, “When I grow up I want to be driving the big cars,” he said.

His kart shows some signs of contact with others and he explained what had happened, “I was trying to find my racing line and stay in it, but then someone bumped me. I didn’t like him bumping me off my line so I started bumping him back.”

He quickly learned that rubbing is racing and isn’t afraid to mix it up to stay on his fast line around the track.

He finished fourth in points last season but was racing against kids much older. This season he sits in third place at Ashway in the East Tennessee Championship Point Series running a stock motor in the beginner champ kart class. The engine he uses is a stock Predator taken straight off the shelves at Harbor Freight, but his crew thinks he may be running against motors that aren’t quite stock this season.

His goal is to win races and get a championship, “I want to win a lot of races and at the end of the year I want that big trophy and the champions jacket. I also want to try my best and be a good sport to others.”

When asked if he wished to thank anyone he said, “I want to thank Mike and Blake, all my family, sponsors and everyone that helps me at the track.”

His father describes him this way, “He’s just a typical kid running all over the place until he puts his helmet on and slides down into the seat. It’s then he changes to a competitor on the track.”

Freddy has played wee ball in the past, won the 75 yard dash at field day this year and will try out little league flag football this fall for a Gibbs team, but he seems more at home around a race track.

When asked what advice he would give to a friend interested in racing Freddy said, “I’d tell them it’s fun and you get to go fast. I’d also tell them you have to try really hard and it feels good to win.”

No matter if you call him “Bubby” or “Fast Freddy Ahrens,” he is one to watch as he turns the wrenches and chases his dreams.