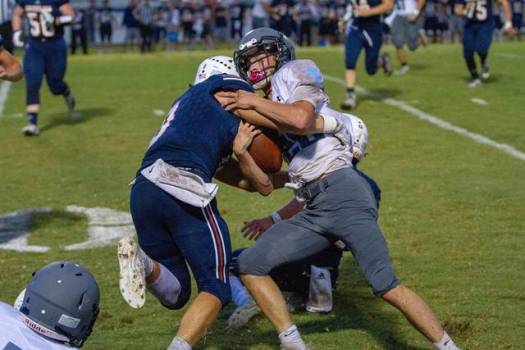 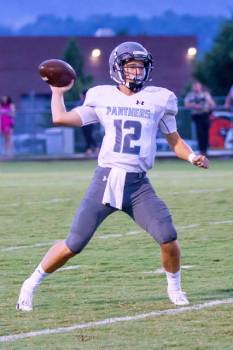 <p>Caden Brunsma sets up to fire a pass down field.</p>

The Cumberland Gap Panthers had their first taste of 2019 Friday Night Lights Aug. 23 at Grainger.

All the practices and scrimmages leading up to this opener indicated that the Panthers were ready to play and play well. Head coach DeLynn Cline said this would be the keys to victory for the Panthers, “The first game is always interesting. You want to keep penalties and turnovers down, and you’re excited to finally to go against another team other than your own. We have two key components out tonight and probably a few more weeks being Nate Fuson and Dalton Cornett. We have to have others step up, and that’s what we are looking for tonight is to see who’s ready to play. The big key is up front on both sides of the ball.”

The Grizzlies took them out of their game plan especially during the second half and ended up winning convincingly by the final score of 43-21.

Cumberland Gap played well during the first quarter, but it was Grainger who went down the field to score first. They led 8-0 with 10:45 showing in the first.

Caden Brunsma struck quickly for the Panthers as he tossed a 48-yard touchdown to Holden McDaniel. The point after was good and the Grizzlies held a one-point lead, 8-7.

During the second quarter, Grainger ran 21 yards for their second touchdown of the night. After the conversion was good they led 16-7.

Brunsma and the Panthers scored again, this time on a four-yard run but missed the PAT. The score was 16-13.

Grainger got another score with 45 seconds remaining and led 22-13 when the half ended.

Grainger got three more scores during the second half, and the Panthers were able to record only one more when Lance Owens ran it in from four yards out. The two-point conversion was good, and the score was 43-21.

Stat of note: Two Panthers were ejected for unsportsmanlike penalties.

The Panthers will return to their friendly home field Friday and host Thomas Walker, Va.