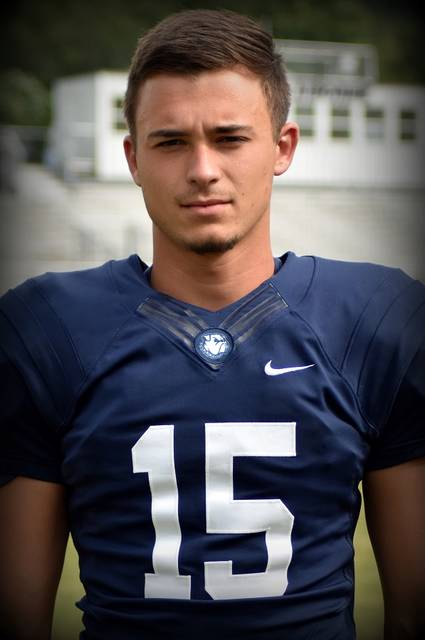 Eli Stone to Haydn Hollin (pictured) continues to be a lethal combination for the Bulldogs.

The Bulldogs loaded the buses and made the long trip into Johnson County Oct. 4 to do football battle with the Longhorns. Both Claiborne and Johnson County were identical 2-3 overall coming into the game and both could use a big victory in classification.

The game was scoreless until the 8:31 mark of the opening quarter. With Claiborne backed up on their own goal line, the Longhorns got to Eli Stone and tackled him in the end zone for a safety giving the home team a rare 2-0 lead. Johnson County added to that on a 9-yard run by Curtis Lowe. The point after missed, and the Longhorns held an 8-0 advantage.

The Claiborne coaching staff was looking to make adjustments and convince the Bulldogs to keep fighting, telling them they were only down by two scores, two possessions. The Bulldogs needed to come out of the locker room determined to get back in the game with just a single score, but it did not materialize.

The Longhorns waited until there was 49 seconds left in the third to score and once again it was on a 9-yard run by Lowe. The point after was no good and the score was 21-0.

The Bulldogs rallied behind the connection of Stone to Haydn Hollin. A 25-yard aerial connection between the two were the first points on the night for the Bulldogs. Stone kicked the point after, and the score was then 21-7.

Seconds later, the Longhorns struck again, this time on a 36-yard run to make the score 27-7 after another missed PAT. The Longhorns scored again with 6:48 remaining in the game. Eli Stone blocked the point after try making the final score 33-7.

The 2-4 Bulldogs will travel to Cosby Oct. 11 to battle the one-win Eagles.