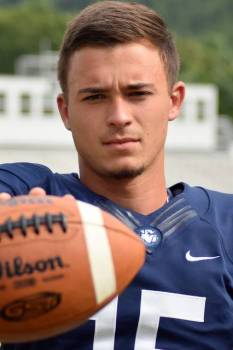 <p>Allen Earl | Claiborne Progress</p> <p>Haydn Hollin was the go-to-guy in the second half when the Bulldogs needed a big play. He had 172 yards and two touchdowns.</p> 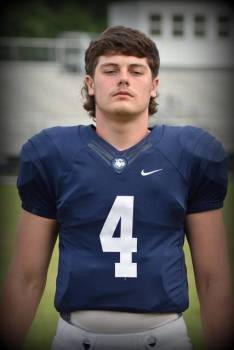 Claiborne High School loaded the buses full of players and cheerleaders and went to Cosby to battle the Eagles on the gridiron. The Oct. 11 fall weather had finally arrived and fans were enjoying watching the game in cool comfort. Cosby needed a win and so did Claiborne. so everyone was expecting a hard fought contest.

Claiborne got on the board first with Eli Stone on a short run and led the game 6-0 but missed the extra point. Minutes later, Cosby responded with a touchdown of their own to tie the game at 6-all.

Before the first quarter had ended, Claiborne had re-taken the lead on another run by Stone. The score was 12-6 when the second quarter began.

Cosby jumped ahead and led 13-12 with six minutes remaining in the half. Neither team found the end zone for the rest of the half, and the Eagles took a one-point lead into the break.

Claiborne got the first score of the second half on a pass play covering approximately 40 yards from Stone to Haydn Hollin. The Bulldogs now led 18-13.

Cosby still had fight left in them and scored plus converted for two making the score 21-18 late in the third quarter.

The Bulldogs responded quickly with a long Stone to Hollin connection and retook the lead 24-21.

Claiborne led going into the final quarter with the game still very much up for grabs. The Eagles were faced with a fourth and long but beat the defense for another touchdown making the score 28-24.

The Bulldogs were on another drive following the Cosby touchdown but couldn’t punch it into the end zone. With four minutes remaining, Cosby had the lead and the ball. They scored again and led by 11 points, 35-24.

With 1:49 left, Claiborne needed a miracle. The miracle wasn’t meant to be and the Eagles had defended their home field by the final score of 35-24.

Claiborne will have to find a way to shake this loss off and get ready for a very good Chuckey-Doak Black Knights’ football team.