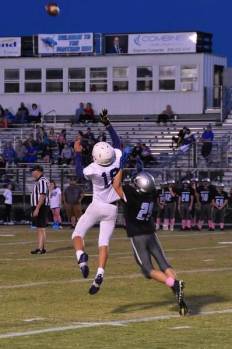 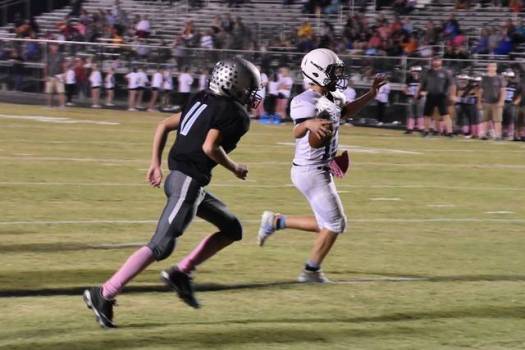 <p>Isaiah Gerrels crosses the goal line while Bradon Painter arrives just a bit too late to make the play.</p> 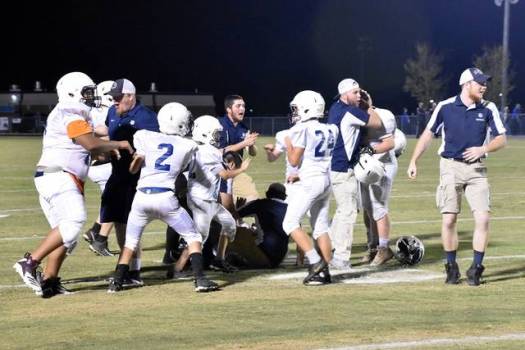 <p>The Bulldogs celebrate following an epic game against their rival.</p>

The middle school football teams of Cumberland Gap and Claiborne renewed their rivalry Oct. 10 on a beautiful fall evening. Neither team had the season they wanted as far as records, but this game defines a season and always has despite coaches from both sides talking it down. This game has always had more meaning than others. It sets up the high school rivalry giving the players a glimpse of what’s to come.

The teams went through their warm ups, the captains met at midfield for the coin toss and with fans in place the ball was kicked off to the Panthers. The Panthers began a drive that ended in points when Andy Osborne found pay dirt at 2:27. The two-point conversion was no good, but the Panthers led 6-0.

The first quarter ended with Panthers leading 6-0 as Bulldogs were driving. The drive stalled on the Panther 26, and the home team got the ball back.

The Panthers were driving again but fumbled midfield with 3:21 remaining in the half; however, two plays later Claiborne also put the ball on the grass and the Panthers recovered.

During their next drive, the Panthers turned the ball over on downs to the Bulldogs with just a minute remaining in the half but time ran out. During halftime, the eighth graders and parents were honored for their dedication to the middle school program.

The Bulldogs got the ball and drove into the red zone and was faced with a fourth and short. The hard count drew the defense offside to continue the drive, which ended two plays later by an Isaiah Gerrells rushing touchdown. The conversion was no good, but the game was tied at 6-all.

The Bulldogs forced another fumble and recovered near midfield but turned the ball over on downs back to the Panthers. The third quarter ended in a 6-6 tie.

The Panthers opened the final quarter with a 44-yard run by Brandon Painter for the touchdown, but the conversion failed. The score now was 12-6 Panthers at 7:12 mark.

An onside kick was tried by the Panthers, but Claiborne recovered and started their drive on their own 44 and drove to the 6-yard line where they faced third and goal. Gerrells passed to Landon Poore for the game tying touchdown on fourth and goal. The go-ahead conversion was ran in by Gerrells with great blocking by the offensive line. The score was 14-12 with the visiting Bulldogs leading with 2:03 remaining.

The Panthers shot themselves in the foot on their next drive with a penalty that took away a long gain. With 37 seconds left, Cumberland Gap was faced with a fourth-and-5. They converted the first down with 30 seconds remaining. An interception by Gerrells had the Bulldogs thinking victory was theirs but another Bulldogs fumble, this time on the victory play, gave Panther fans hope as Gavin Owens scooped it up and ran down the Panthers sideline for what was going to be the winning score, but Gavin Sheldom made a great stop that prevented the touchdown.

The Panthers had time for one more play, but it too was stopped and time ran out with the Bulldogs getting the hard earned 14-12 victory. This meeting between rivals was so entertaining they should have charged fans once more when they left. It was a great battle between two teams that at times looked like they didn’t want to win by all the miscues but at the same time did all they could do to win.

After the game, Bulldogs head coach Dalton Lee said this, “I’m so proud of this team, those guys. They fought so hard this season and should have had more wins. To win this game, this way was a great way to go out.”

Claiborne Middle School said goodbye to coach Lee as he is turning the reigns over to former Bulldog Blake Helderman.

The 2019 meeting between these two teams will go down in history as one of the best ever played.