Concealed carry class, what to expect 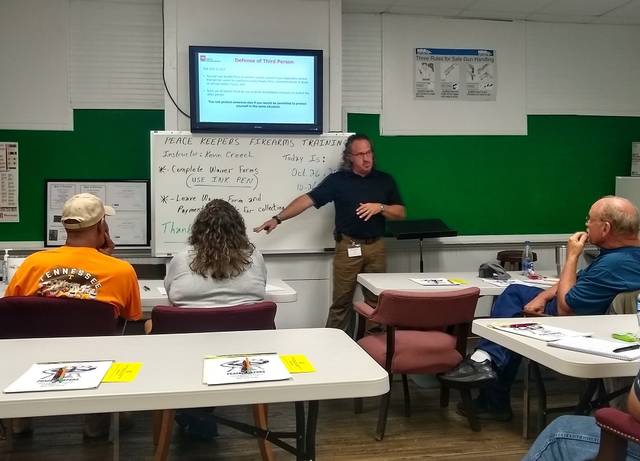 Tennesseans who are seeking to carry a concealed firearm need to take a Tennessee Concealed Carry class — sometimes called a Handgun Safety class by a licensed instructor. Here are a few things to expect when attending these classes.

The classes are meant to provide general information about the various types of handguns and how to operate them safely, rules and regulations affecting open carry and concealed carry, reciprocity between states and more.

Tennessee recognizes that its residents have a Constitutional right to carry a firearm, but at the same time it reserves the right to regulate how and where open and concealed carry is allowed. That’s where the classes come in and quite frankly are very necessary.

It’s important to know the approved and desired methods of transporting, storing, safely operating and cleaning handguns. The course will cover all of that.

Emphasis is placed on what happens when you pull the trigger in defense of yourself or others and the great responsibility that bullet carries with emotional costs, criminal and civil liability. Your instructor will discuss intent and just exactly what imminent danger is defined as.

There is much more legal discussion concerning changes made to carry laws and practices pertaining to places of business, schools, colleges and in particular restaurants which serve alcohol.

Another thing that is stressed is terminology. It is important to use the proper terminology such as neutralize a threat that made me fear imminent danger of serious injury or death. After the initial call to 911 following such incident it was recommended that the Fifth Amendment be invoked.

Seek legal counsel and realize that the legal challenges will come, and it’s better to be faced with those than to not protect yourself or your loved ones. The local police are great, but they can’t get there during a five seconds or less encounter, “We are the first line of defense; we are our brother’s keeper,” says instructor Kevin Creech.

After four hours of instruction time, you will be tested over what was discussed. If the student makes above a 70, he or she passes and qualifies for the range portion of the testing procedure. You will need to bring a handgun of any caliber and 50 rounds to participate in range firing. These handguns and ammunition will not be allowed in the testing area. They will be allowed only on the firing range.

There are a few tips to be aware of, when your instructor says this will be on the exam be sure to pay extra attention to what it is and how it is stated. A second tip would be to bring a handgun that suits the application. It doesn’t have to be large carry pistols as many will simply bring rim-fire semiautomatics due to accuracy and cheaper ammo costs.

The price of these classes vary as do the lengths of permits, but it is very little time and money spent to have the assurance that you are the first line of defense against someone wanting to use deadly force against you or your loved ones. Remember though, once a round leaves the barrel you will be responsible for whatever it finds.

If interested in taking a class, here are two locally that schedule classes regularly:

As always be diligent and seek information and regulations posted on tn. gov website.