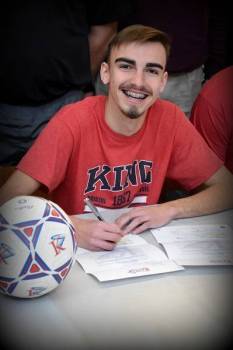 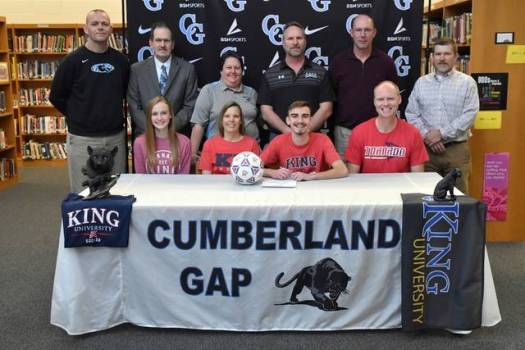 Two sport athlete Drew Ramsey is the son of Stephanie and Jeff Ramsey of Harrogate, Tennessee. Drew has one sister Aly and they were all there for him when he signed to play soccer with King College during a ceremony in the Cumberland Gap High School library, January 22. Joining them were school officials, teammates, coaches and friends.

Ramsey said this about his decision, “King was a good choice for me. It’s a great location, great soccer and a great coach. They have great academics and their coach made me an offer I just couldn’t pass up.” He added, “It just felt like home.”

When asked about soccer at Cumberland Gap Drew said, “We have all been growing. The program and all of us have been growing over the last three years. Under the coaching of Matt Neverstitch and Lorri Kimbrough we have been getting better every season.”

Drew wanted to take a moment to say thanks to a few people, “I’d like to thank all my coaches, Matt, Lorri and my dad, my teammates on both the soccer and football teams and thanks to Jesus. There is nothing you can’t achieve if putting your heart and mind to it.”

Stephanie knows about King College as she played basketball as a Tornado so Drew’s decision was a good one to her, “I am thrilled he chose King. Coach Richard Rose will make him a great player and he’ll grow a lot off the field. It’s a great place with a small town feel. King is such a good college.”

His father Jeff said this, “I am pleased. I feel it’s a good fit and I like the coach. He will be a good mentor and help Drew transition into adulthood. We are very proud of him.”

His high school coach Matt Neverstitch had this to say about Drew, “He’s a team oriented player who plays with passion. I think he a has a calling to play college soccer. He’s a great player, very coachable, great teammate and is very skilled athletically. I will definitely miss him; he’s a great kid.”

Drew will have one last season with the Panthers this spring.