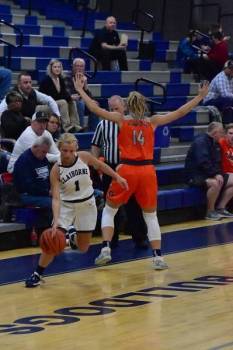 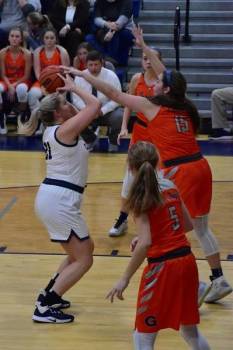 <p>Allen Earl | Claiborne Progress</p> <p>Kelsy Munsey found it difficult to get this shot up down in the paint.</p>

The Lady Bulldogs welcomed the Lady Grizzlies of Grainger into Carl R. Green Gymnasium on Jan. 27. Earlier in the day they learned that they had to shut down two players due to injury. Senior Kaylee Cox had injured her back and was going to miss the rest of the season. Also missing the rest of the season is Sarah Fultz due to a knee injury.

The first thing the Lady Bulldogs needed to do was find an identity without those two players. A two-loss Grainger squad was not the team to battle coming off this news. The Lady Grizzlies came in strong as expected and quickly led 15-2.

Claiborne struggled to even pass against the Grainger defensive pressure let alone get good scoring looks. The first period came to an end 23-2 with the Lady Bulldogs only sinking two free throws.

During the second, Grainger was as advertised. They subbed in bench players all the while increasing their lead out to 38-3 at the half.

Claiborne finally hit their first basket from the field mid-way through the third period but were still struggling. Following the Kelsy Munsey basket in the paint, Trinity Jones hit another one. At the end of three, Claiborne was behind 56-9. Claiborne battled a running clock and the Lady Grizz, but they never found the group of players that produced scoring.

At the final buzzer, Grainger left with a convincing 63-16 victory.

Leading Grainger in victory was Alia Maloney with 13. Claiborne was led by Skylar Cook with five. Hailey Sexton had four. Kelsey Munsey dropped in three and Emma Beason along with Macie Sumner were held to only two points each.