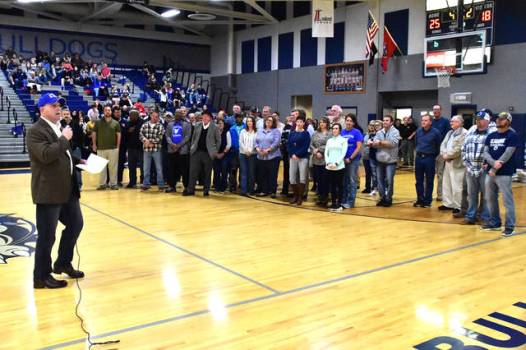 <p>Photos by Allen Earl | Claiborne Progress</p> <p>Col. Lance Green stands on the floor with just a few of the Blue Devils during the recent dedication of the CHS gymnasium.</p> 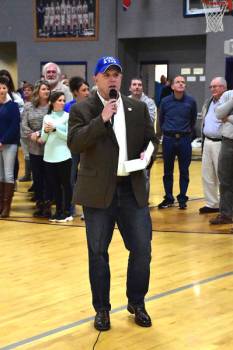 <p>Col. Lance Green spoke about the process of getting the gymnasium named after his father and gave many thanks to all involved during the event.</p>

During a short ceremony at the halftime of the boys rivalry game against Cumberland Gap, Col. Lance Green, son of Carl Green, spoke of his father’s achievements on and off the court.

Lance thanked the many in attendance and for all the former Blue Devils who joined him on the court. Green also gave thanks to the school board members and everyone who helped in any form or fashion to get this accomplished. Coach Carl Green’s name is now on both scoreboards, outside on the bricks and on a plaque inside near the gymnasium.

It’s a fitting honor for the winningest coach in Claiborne County basketball history.