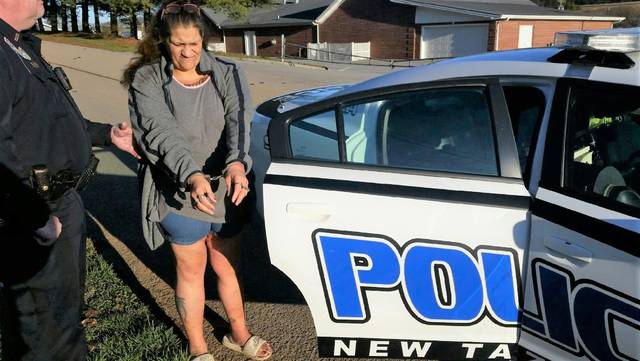 Tonya Sizelove is shown being escorted to jail on Feb. 14 on the charge of aggravated perjury that allegedly occurred during a criminal court trial. Her testimony did not match her initial E-911 call nor evidence given to officers on scene during an aggravated assault.

The Claiborne Grand Jury has indicted a woman for allegedly perjuring herself during a criminal court trial late last year. The case involved the aggravated assault of a young woman in June of 2018.

Tonya Sizelove, one of several alleged witnesses to the incident, called E-911 to report the assault. Sizelove, 46, apparently provided details to the dispatchers that did not match her testimony during trial.

New Tazewell police Lt. detective Gary Ruszkowski said that it was obvious to the officers on scene that the young female victim had sustained injury to the face and head, leading them to suspect that she had indeed been assaulted. Additional information from witnesses on scene alleged the male suspect had also choked the victim.

A warrant was issued for the arrest of Douglas Adam Vanover, the male suspect who had initially fled the scene. Vanover was later apprehended, with the assistance of the Claiborne County Sheriff’s Office S.W.A.T. team.

Sizelove was subpoenaed as a witness for the trial, held in November of last year, during which time her story apparently changed.

Inconsistent testimony and the recent discovery of new evidence prompted the Office of Attorney General for the 8th Judicial District to move forward with indictment proceedings.

Sizelove was arrested and taken into custody on Feb. 14 by NTPD chief Ben Evans and Officer Harrison Cornett.

Vanover was convicted of aggravated assault with bodily injury and sentenced to 365 days in the Claiborne County Jail. He was given credit for 365 days of jail time already served and placed on probation for 10 years.

The conviction for aggravated assault was ordered to run concurrently with a separate case involving the coercion of a witness, among other charges.

Vanover was arrested again on Feb. 12, this time for criminal trespassing.

An indictment does not indicate guilt. It does indicate that the grand jury found enough evidence to warrant sending the case to trial.