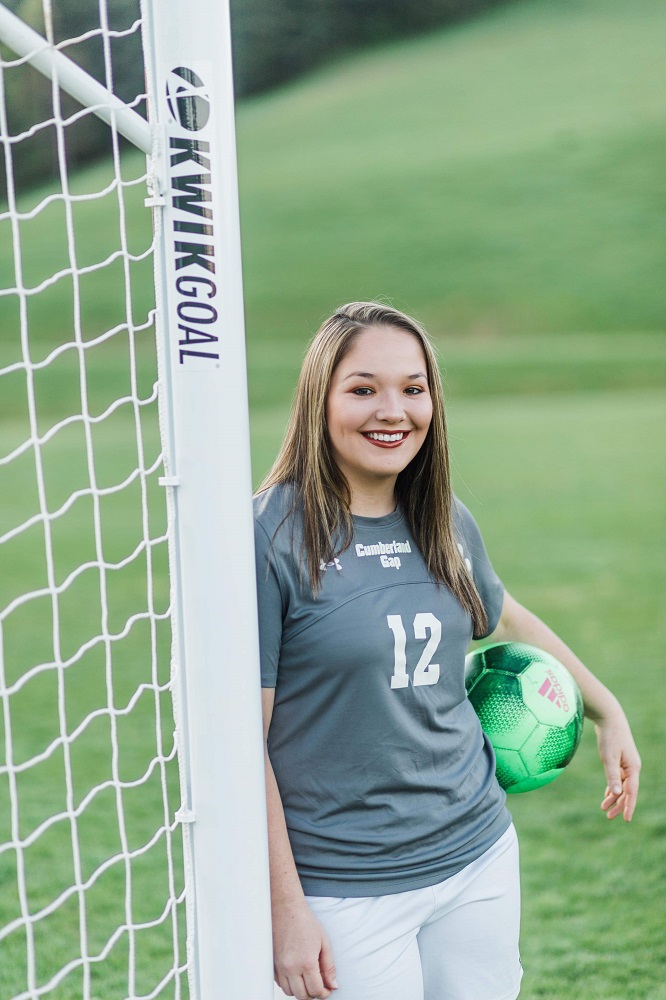 Brooklynn Whitaker is a senior at Cumberland Gap High School and she is signing to play collegiate soccer with Bluefield College in Bluefield, Virginia. Brooklynn is the daughter of Mike and Kristen Whitaker. Brooklynn has four older siblings, Mary, John Michael, Michelle and Stephanie and one younger brother, Hunter. Brooklynn chose Bluefield College because they are a private, liberal arts school with a good national ranking and they were far enough away from home but not too far.
Brooklynn plans to study pre-law as a Criminal Justice major, in hopes of pursuing a career as a Guardian ad Litem. Whitaker began playing AYSO soccer in Harrogate when she was five and she participated on the cheer and dance teams during her elementary and middle school years at Heritage Christian Academy and also played basketball until her sophomore year at the Gap; ultimately, her love for soccer led her to play that sport year round leaving time for little else.
Whitaker wants to thank her high school coach Lorri Kimbrough, who has helped mold and shape her for the better part of her life. “Lolo” as her girls call her, is not just a coach but a friend and confidant. Brooklynn also wants to thank coaches Jeff Sorke and Quentin (Q-dogg) Mason for all the time, energy and support they have given over the years, her family and friends, her CGHS teammates who always pushed her to be better and made playing soccer the thing she look forward to most each and every day, Mara Brock for being the best AT in the world, Dr. Rosemary Day for putting her back together plus a host of other great coaches and assistants.
Whitaker’s funniest soccer moment (not sure about best) was.during a Greenville game when she broke her arm for the third time but wouldn’t tell coach because she knew she would have to come out of the game.
Her parents had this to say, “We are so excited that Brooklynn has this wonderful opportunity to continue playing the sport that she loves while beginning the pursuit of her dreams. There are so many important life lessons that can be learned through sports.
We can’t wait to see what the future holds for Brooklynn, and couldn’t be prouder of her academic achievements while participating in sports.”
Whitaker also gave a comment, “Soccer has always been a huge part of who I am, so getting to continue playing at a collegiate level is a dream come true. Having played with some of my best friends since I first started, the new season will be different.
I’m proud to have gotten the chance to make history with the Cumberland Gap Lady Panthers, and I will cherish all the friendships that team has brought me, but now we are all on to bigger and better things, and I can’t wait to see what those are.”