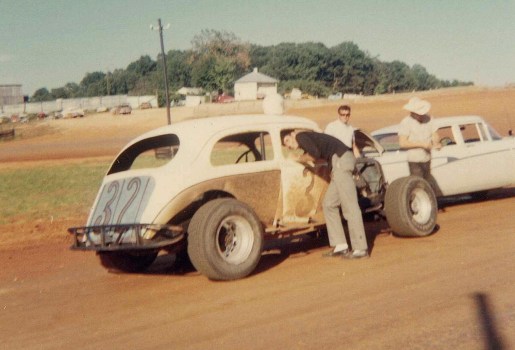 Paul Gose went from being a local resident to a WWII soldier and then later drove into dirt-racing legend status all the while never forgetting the people who made it all possible. Paul Gose was born in Claiborne County, Tennessee in 1925 but he moved to Morristown and was then thrust into military service during World War II serving in Germany as a motorcycle messenger and fireman.

He enjoyed the two-wheelers so much in fact that he began racing them.  As a 21-year old, Gose raced in England and also when he returned to the United States before switching to the automobile as primarily a hobby.
The hobby somewhere along the way turned serious and his auto-racing career began.

The love he found for his new sport kept him where he wanted to be and allowed him to never hold a public job as we know it.  All his jobs were motor sports related.

He earned his money by working on race cars and building flat-head engines and that was just fine with him. Gose strived to be physically fit and discovered its benefits early in his career. He raced in an automobile for the first time in the late 1940’s.

His father Arthur Gose became Paul’s biggest fan and Paul’s cars were eventually painted bright orange so Arthur could easily pick them up with his diminishing eyesight. It was a winning endeavor from the start and at his best track in Gaffney, South Carolina he began dominating the clay at Cherokee Speedway. One season at Cherokee he won forty-seven out of forty-seven races. He was one of those racers that if the fans saw him at the track they would begin wondering who would finish in second place.
The track promoter paid him one night at the end of the season to simply not show up there so he went elsewhere and won there too. Gose was a racer at heart and that attitude helped him rack up 540 feature wins along the way and an astonishing 74 championships.
As far as his Tazewell Speedway record goes he won several races and took a Sportsmanship award in 1969 and two years later won a championship. He also has a second place in points while racing on the clay of Tazewell Speedway. In addition to his dad, he had many, many loyal fans.

Gose was the type of driver that would never pass on a chance up to talk with the racing fans, sign autographs or to just shake hands.  In the mid-70’s Gose took on another motor sports related job this time as a flag man at Tazewell Speedway: however, in 1990 motor sports took a hit as he suffered a stroke and sadly passed away in 1994. His loving and supporting wife was Louise and together they had three daughters; Glenda, Angie and Connie. Anyone that knew this great racer will never forget Paul Gose and his accomplishments in racing.

Gose is honored at several tracks around the southeast area and is also enshrined in the Cherokee and Atomic Speedway Hall of Fames. You will occasionally see his restored orange #32 pacing the field at many area tracks during special events; a fitting tribute to a true dirt-racing legend.