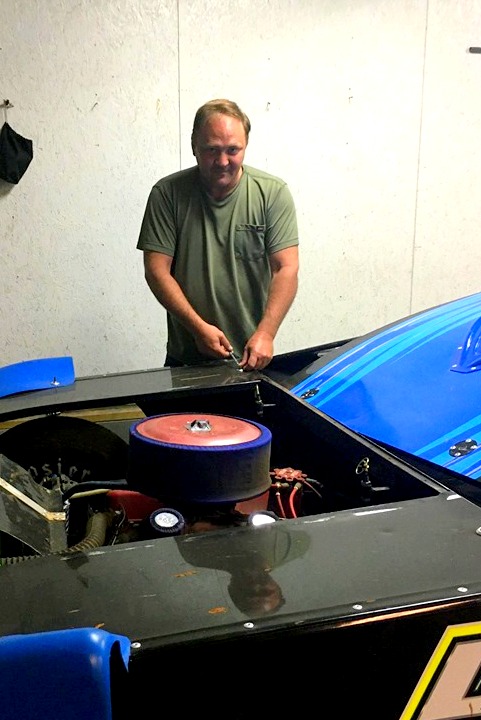 Andy “The Wild Child” Wilder is the son of Charlotte and Robert Wilder. He drives his car on the edge and sometimes past it. Years ago he was known for racing on every inch of the track trying to become faster even trying running the top of the wall a few times.

Wilder began his racing career as another dreaming kid wanting so badly to go fast around the Taz but now he has kids of his own, Courtney and Cheyenne.

His first opportunity came in a Chevrolet Camaro in the bomber class but now he runs late models. The two types of cars are as different as night and day but Wilder seems to like the adjust-ability of the latter. During that first bomber race, his car broke the rear axle ending his first exposure to the sport but nonetheless he was hooked.

During the 2013 season he was having a career and possibly breakthrough day as he qualified on the pole and was leading the race when suddenly the right front tie rod broke as did his wrist when the car took a right turn into the wall. This was his best and worst moment in racing all at the same time.
He hasn’t been able to get that win but he is a steady competitor and that allowed him to finish runner up in season points.

His cars were always under powered but he found a way to compete regardless of the situation but now he is inching closer to that elusive first win.

Wilder spoke about who helped him when he first started racing, “It was only my brother Robbie and I when I first started but now I have Johnnie Jackson, Nick Wilder and Logan Seal.”
Helping him foot the bill in racing are two great sponsors Lone Mountain Marina & Campground plus Sharp’s Package Store.

When asked who he would like to thank in racing Wilder added, “I really want to thank Logan Seal, Billy Gordon, Nick Wilder, Robbie Wilder and Johnnie Jackson.”
Wilder stated his advice to younger drivers this way, “Go to college and get a good job because racing costs a lot!”

His number 24 began as a joke, Wilder explains, “My brother and I were huge Dale Earnhardt fans and I decided to put Jeff Gordon’s number on my car to make him mad. It’s been on it ever since.”
Andy Wilder is turning wrenches and chasing that first win. He’s getting close but if somehow it never happens, rest assured, The Wild Child is having the time of his life.

The Panthers of Cumberland Gap are currently out in the heat working hard during their summer morning workouts. Everything is... read more