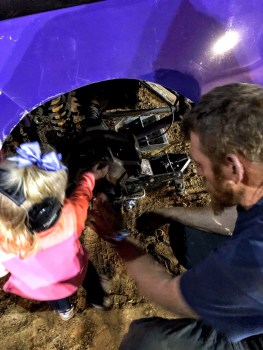 Josh Chesney grew up watching his father J.D race and that inspired him to give the sport a try.

J.D. and Maude Chesney watched Josh follow his dad’s lead in racing from the learning stage to the winning stage. He currently has the support of other family members behind him including wife Andrea and two kids, Alice and Nova.

The racing scene has changed since Chesney first raced in an Oldsmobile Cutlass. The first time out was uneventful as he didn’t finish; however, he would win often down the road.

In fact, Chesney has won around 20 races but still hasn’t won a championship. His father has been there to help from the start and still helps today. Joining in to help now are Tucker Smith and Brandon Muncey.

He does have sponsorship support and Chesney wished wanted to thank them, “I have to stay thanks to Ronnie’s Garage and 33 Hardware for their help. I want to also thank my family and crew.”

There are ups and down in racing, good and bad moments. Chesney talked about them, “The best moment I had in racing is coming from the back to win and the worst moment is rolling over.”

Josh has a solid short term goal which is simply to have a good season. Ten years down the road his goal is much the same, “I want to still be racing.”

Josh Chesney has grown as a racer and he has become a threat to win in not only the classic car but anything he gets in. He can be easily recognized on the track, just look for a beard waving in the air out from under his helmet.