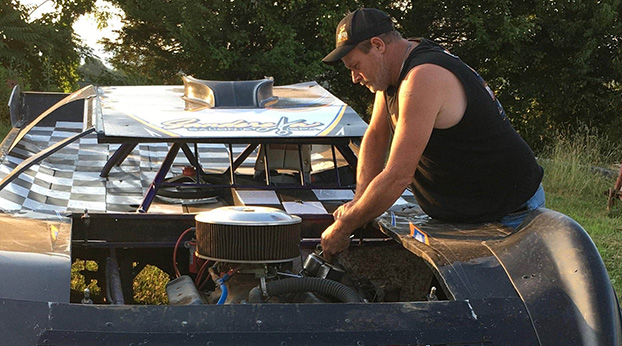 Troy Eads’ road back to racing has been a difficult one and he has jumped the cushion in his life at times but now he’s back on track turning wrenches and chasing dreams.

When asked what got him into racing he described it this way, “People thought Dodge wouldn’t make a good race car. I wanted to prove them wrong.”

His parents are Ray and the late Brenda Eads and supported him when he first began along with Jason Hurst, Arils Miracle, Jonathan Miracle, Charles Campbell, Shane Campbell, Lance Carter, Robbie Whitaker and Tandy Derreberry. His first car was a 1958 Plymouth Fury and he raced it at Newport Speedway the first time out to the checkered flag.

When asked about his best moment in racing Eads said, “Winning the Tazewell Speedway Super Late Model Championship during the 2007 season.”

Conversely, he described his worst moment this way, “It had to be feeling helpless trying to save Dusty Lay when he was burning in his car while being on fire.”

Troy has wheeled his car to several wins over his career and two track titles at Tazewell Speedway (1994 and 2007).

Eads wanted to thank those that helped him along the way saying,  “Jesus & Momma in heaven (Brenda) for believing in her “Troyboy” and my dad For his criticism to always push me to try harder. My sisters Sandy and Tammy. Jason Hurst and all my friends and family for making it fun and supporting me & making it a fun gathering that everyone enjoys.”

Troy wanted to give some advice to young racers and said, “Racing is great memories and you have to have your heart in it. It takes a lot of money and time.”

Every racer has a story behind why he or she runs a certain number on the car and Troy spoke about his choice, “My dad ran derby’s running the number 50 so I am 50 too so I run 52 and my friend Jonathan Miracle chose the number 50.”

Troy is back on the dirt and seems to be happy turning the wrenches and chasing his dreams with the support of many loved ones. He currently runs in the Sportsman class at area tracks.