UT staves off Cincinnati at home 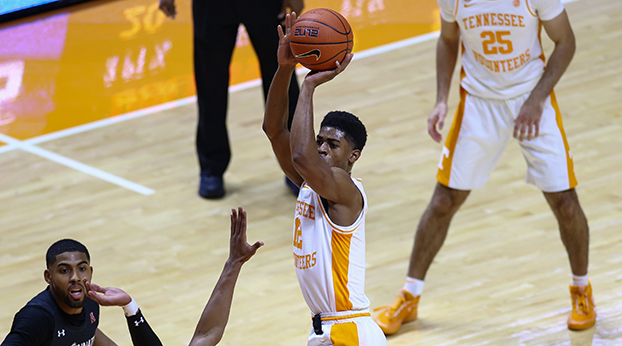 Tennessee guard Victor Bailey Jr. (12) shoots against the Cincinnati Bearcats during the first half at Thompson-Boling Arena. - Photo by Randy Sartin-USA TODAY Sports

A double-double from senior John Fulkerson and a second consecutive dominant defensive effort pushed the Tennessee basketball team past Cincinnati, 65-56, on Saturday inside Thompson-Boling Arena.

On defense, the 12th-ranked Vols forced 17 turnovers, blocked four shots, held Cincinnati to a .379 shooting percentage and kept the Bearcats off the foul line, as UC only attempted seven free throws.

Fulkerson’s game-high marks of 15 points and 12 rebounds marked his fourth career double-double, and his rebounding total marked a career-high.

Freshman Jaden Springer poured in his first career double-digit scoring output, with 11 points, while also recording a team-best plus/minus of +10 in 25 minutes of action.

Sophomore Josiah-Jordan James had another consistent performance, scoring eight points, pulling down four rebounds, dishing off three assists and a grabbing a career-high-tying three steals. James was also big from the charity stripe, knocking down all six of his attempts.

A slow-paced opening nine minutes saw Cincinnati holding the early advantage at 15-11 with the teams combining for a 9-of-30 shooting mark from the field.

Over the final 11 minutes of the half, the Vols took control on the defensive end and were more efficient on the offensive side, outscoring the Bearcats 19-9 to take a 30-24 advantage into the break.

Cincinnati came out of halftime with a head of steam, erasing the Vols’ advantage and eventually taking a 40-37 lead with 13:16 remaining.

Tennessee remained undaunted, locking the Bearcats down on defense, knocked down all eight of its attempts from the foul line and hit multiple timely baskets to take a 51-45 lead with just 10 minutes left in the second half.

The Vols withstood each late Cincinnati punch while continuing to deliver from the free-throw line to walk away with the nine-point victory.

All For Charity: The Vols were on target from the foul line Saturday, knocking down 25-of-30 attempts as a team.

Up Next: Tennessee returns to action Tuesday when it hosts Appalachian State. Fans can catch the action from Thompson-Boling Arena on the SEC Network starting at 7 p.m. ET.