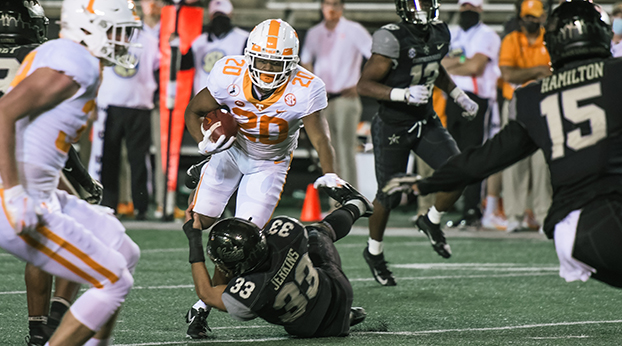 Tennessee was dominant in all phases of the game in a convincing 42-17 win over in-state rival Vanderbilt on Saturday in Nashville.

UT (3-6) was led by true freshman quarterback Harrison Bailey, who completed 14-of-18 passes for 207 yards and a pair of touchdowns, all career highs.

The freshman connected with redshirt senior wide receiver Velus Jones Jr. on a 74-yard touchdown reception in the fourth quarter to cap the scoring. Jones finished the contest as UT’s top receiver with 125 yards and a pair of touchdowns on seven receptions, all career highs.

Redshirt sophomore J.T. Shrout entered the game in relief in the second quarter and saw action throughout the game. The Santa Clarita, California, native completed 6-of-13 passes for 90 yards and a career-best two touchdowns.

Defensively, sophomore linebacker Henry To’o To’o paced the Vols with 10 tackles, half of a tackle for loss and a pair of pass breakups. Junior defensive back Bryce Thompson had a pair of tackles and returned an interception for a touchdown in the second quarter, a play that turned the momentum of the game.

Vanderbilt (0-9) was led by quarterback Ken Seals, who was 22-of-39 passing for 239 yards. Seals threw a pair of touchdowns and one interception.

After the UT defense opened the game with a pair of three-and-outs, the Vols opened the scoring on a nine-play, 42-yard touchdown drive with 5:54 left in the first quarter. Bailey connected with redshirt junior tight end Princeton Fant on a 6-yard touchdown reception.

Sophomore kicker Toby Wilson followed with the extra point. Fant and Wilson, both Nashville-area products, scored their first points for the Orange and White in their hometown.

The Commodores responded immediately with a 12-play, 75-yard scoring drive to tie the game at seven with 1:50 to go in the opening quarter.

Following a UT turnover, Vanderbilt’s Pierson Cooke hit a 39-yard field goal to give the Commodores a 10-7 advantage.

Momentum shifted midway through the second quarter when Thompson pulled in a one-handed interception and took it 18 yards to the house to put the Vols back ahead 14-10 with 8:37 remaining in the half. The interception was the eighth of Thompson’s career and his first pick-six.

The Vols offense switched into high gear and scored 21 unanswered points heading into halftime. Shrout connected with Jones Jr. on a 23-yard touchdown reception, before tossing a 26-yarder to freshman Jalin Hyatt to give the Vols a 28-10 lead with just under a minute left in the half.

UT continued their first-half momentum, scoring on a five-play, 72-yard drive to open the third quarter. Senior running back Ty Chandler capped the drive with a 20-yard touchdown rush.

The Vols responded immediately as Bailey and Jones Jr. connected on a 74-yard touchdown pass to give UT a 42-17 lead in the final frame. It was Tennessee’s longest play from scrimmage this season.

The Vols return to Neyland Stadium for Senior Day on Dec. 19 to take on No. 5 Texas A&M at noon ET.