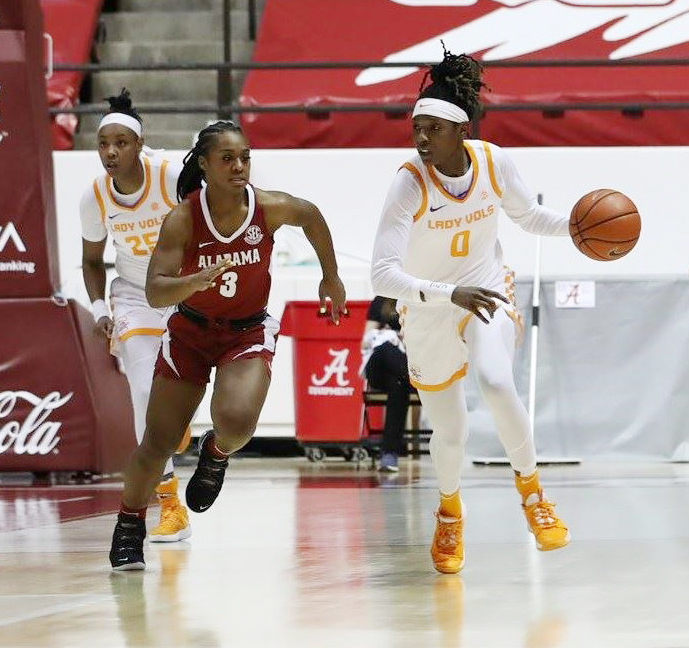 Senior Rennia Davis poured in 21 points to lead the No. 23/24 Lady Vols to a commanding 82-56 victory over Alabama in Coleman Coliseum on Sunday.

Davis added 10 rebounds to her 21 points to record her 34th career double-double. Junior Rae Burrell and sophomores Tamari Key and Jordan Horston were also in double figures for Tennessee (9-2, 3-1 SEC), finishing with 17, 15 and 14 points, respectively.

UT, which won its second straight over the Crimson Tide, improved to 51-7 in the all-time series and 17-2 in games at Coleman Coliseum.

Both teams came out firing from long range, tying the score at 3-all just over a minute into play. Lewis and Walker combined to give Alabama an 8-5 lead by the 6:37 mark, but Burrell knocked down a jumper to kick off a 6-0 run that gave UT its first lead of the game at 11-8 a minute later. Alabama answered with a 6-0 run of its own, reclaiming the lead at 13-11 off a Walker layup with 3:41 remaining in the quarter. The Crimson Tide would maintain a lead into the closing seconds, but Horston fired in a trey to tie the score at 16-all at the end of the first.

Horston picked up where she left off in the second, putting the Lady Vols on top by driving across the lane and hitting a reverse layup. That was the second bucket of what would become a 19-0 run fueled by Horston, Key and Burrell that put Tennessee up 32-16 just over halfway through the period. Ariyah Copeland ended the drought for UA with a layup, but Davis and Burrell kept the pressure on, combining for six quick points to give UT a 19-point lead with 2:39 left in the half.

Alabama would cut the deficit to 15, but Horston closed out the quarter with a trey and a buzzer-beating jumper to make the halftime score 42-23.

The Crimson Tide came out hot in the second half, whittling UT’s lead down to 14 just over a minute into the quarter, but Davis and Burrell responded with back-to-back treys to give the Lady Vols a 48-28 lead by the 7:41 mark. The teams largely traded baskets through the middle of the quarter with Davis scoring eight-straight points for UT to put the score at 60-39 with 2:52 left in the period. UA narrowed the gap to 17 points off a Megan Abrams jumper a minute later, but UT outscored Alabama 10-4 in the closing minutes, punctuated by a Jordan Walker 3-pointer at the buzzer, to give Tennessee a 70-47 lead heading into the final stanza.

Burrell opened the fourth with a layup to stretch the Lady Vols’ lead to 25. Walker responded with a layup for UA and followed up a Davis layup up with four more points to pull the Crimson Tide within 23 by the media timeout at 74-51.

Following the break, Tess Darby and Marta Suárez hit back-to-back threes to expand UT’s lead to 29 points with just over three minutes to play. Alabama closed out the game with a 5-2 run to make the final score 82-56, giving UT its most points against the Tide since 2012 and first total over 65 since 2016.

Up Next: UT returns home to host UConn at 7 p.m. ET on Thursday in a “We Back Pat” contest that will be broadcast on ESPN.

Balanced Attack: Davis (21), Burrell (17), Key (15), and Horston (14) all finished in double digits for UT. It’s just the third time this season the Lady Vols have had four or more players in double figures.

Sophomores Stepping Up: Jordan Horston and Tamari Key each turned in season-high performances against Alabama with 14 and 15 points, respectively. Key has been in double figures the last three games and Horston the past four. Key has increased her season high in each of those contests.

Big-Time Run: The Lady Vols posted their longest scoring run of the season, managing 19 points spanning the first and second quarters while holding the Crimson Tide scoreless for more than six minutes.