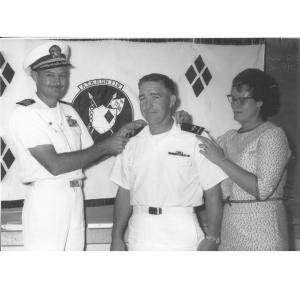 his beautiful bride of 56 years, Beatrice Dobbs Carter of Harrogate, Tennessee, Monday morning January 18, 2021. Charles was approaching his 88th birthday when he passed at the University of Louisville Medical Center. He was known by many names – Charles to his lifelong soulmate, Bea, brother to his three siblings, father to the couples’ five children, Papaw to his 13 grandchildren and 22 great grandchildren, and Chuck to his Navy companions.

Charles was born to Shorty and Thelma Carter in 1933 and remained in the Buggs Island Lake region of south-central Virginia for his entire childhood. After graduating high school, two major events gave shape to his life: he elected to serve his country by enlisting in the US Navy and he gave his heart to his precious Bea on a trip with his brother Owen to the Cumberland Gap.

After just shy of two decades in the same small town, Charles and his new bride set off on a nearly 30-year adventure, during which he would serve his country with pride and they would build a family. There were stops in Norfolk, Honolulu, and Quonset Point, among other ports both domestic and international. His service carried him across the globe.

Charles was the consummate provider and was known for his pragmatic nature. When his family needed more than his Navy salary could provide, he simply added a second, and sometimes third, job to ensure his family was provided for.

As much as Charles was known for his work ethic, he was also known for his faith and commitment to church. A life-long Southern Baptist, Charles always did two things wherever his service took him: tithed and, when possible, served as a deacon. The churches and church families he touched with his kindness and guidance would fill pages because his investment in his communities of faith was one of the guiding principles of his life.

In the late 1970’s, Charles retired from the US Navy and immediately went to work for McDonnell Douglas in St. Louis, Missouri. “Retired” is a poor description as his life simply shifted from Naval vessels to civilian ones.

Their home in St. Peters would be home for Charles for the longest period since he left his childhood hometown and it was there that Charles and Bea found a long-time church home in Willott Road Baptist