Florence Ann Dougherty
Florence Dougherty died February 26th, 2021 at Diversicare of Claiborne, New Tazewell Tennessee. Florence was born May 22, 1938 in Almont, North Dakota the fourteenth of fifteen children born to Katherina (Ermantraut) and Marcus Fitterer.
Florence Dougherty was many things; wife, mother, grandmother, sister, aunt, cousin, friend. She was a widow and single mother to three who was very involved with her three grand daughters. She had 14 brothers and sisters. Florence was a matriarch to her family. She was also a Registered Nurse who worked in the pediatric floor of St. Alexius Hospital in Bismarck, North Dakota for many years, who refused to retire and alway 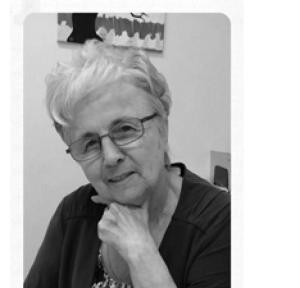 s wanted to help when she could. She was a devout Catholic woman whose stubbornness, independence and down right spunk never ceased to amaze and amuse those around her. She was an avid card player and quilter. Her quilted works of art and original designs should hang in a gallery but instead were placed lovingly on the beds and walls of her family and friends. She was an inspiration to those who knew her and a treasure to those who loved her. She was a fighter who never quit in her battle against Alzheimer’s disease which robbed her of the wit, humor and strength we loved so much. Florence was so many things, but most importantly she was an inspiration to so many around her. She passed peacefully surrounded by family that loved her. Her memory will be cherished dearly by those who knew her.
Florence is survived by her three children, Richard (Caroline) Dougherty, Brewer, Maine, Kathy Zimprich, Tazewell, Tennessee and Colleen Dougherty, Bismarck North Dakota. Grandchildren Jennifer Dougherty, Norway, Shannon Dougherty, Warren, Michigan, and Kelly Zimprich, Knoxville, Tennessee. Brother Marc (Linda) Fitterer, Richland, Washington. Also survived by many nieces, nephews, and friends.
Florence was preceded in death by her mother Katherina (Ermantraut) and Father Marcus Fitterer. Husband Eugene William Dougherty. Brothers and sisters Alphonse Fitterer, Sylvester Fitterer, Marion Stanton, Philomena (Minnie) Krous, Magdalena (Maggie)Felton, Sr. Rita (Rose) Fitterer, Elizabeth(Betty)Reisenaur, Catherine Heck, Anastasia Fitterer, Joseph Fitterer, Sr. Damian (Anna) Fitterer, Regina (Reggie) Samek, Eva Wheeler.
A small private service will be held for family only and a larger service and burial at a later date to be announced.
In lieu of flowers the family requests donations to the Alzhiemers Association in Florence’s name at Alz.org or AlzHiemers Association 225 N Michigan Ave FL17, Chicago IL 60601