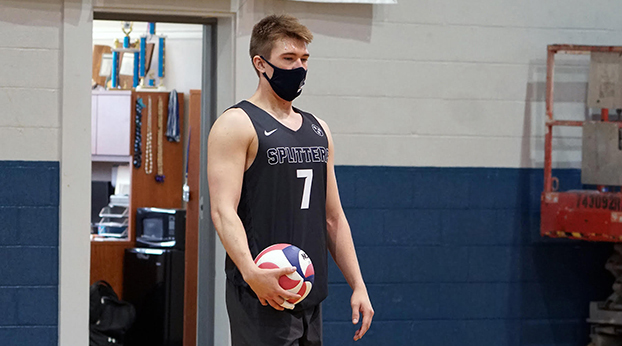 Evening up its record at 8-8, the Lincoln Memorial University men’s volleyball team won its third-straight match by a decisive 3-0 score Thursday afternoon inside historic Mary E. Mars Gymnasium. The Railsplitters were ultra-efficient offensively, recording their second-highest attack percentage of the season (.461) and swinging at a remarkable .720 clip in the opening set to take down Tusculum University 25-18, 25-17 and 25-20.

Making just two attack errors across the first two sets, LMU posted 44 kills in the straight-set victory and held the visiting Pioneers (1-10) to a .159 attack and 32 kills. Outstanding play from freshman right side hitter Justin Sharfenaker and junior outside hitter Logan Kerley highlighted the Thursday matinee, which saw five total team blocks from each team. Sharfenaker set the program record for highest attack percentage in a match with at least 20 attempts, registering a .650 mark with 14 kills and only one attack error on 20 attempts. Kerley laid down a season-best 13 kills off an impressive .524 attack while also making a match-high tying six digs.

Notching 19 kills with just one attack error in set one, the Railsplitters used a 6-3 run to go up 20-14. Then three consecutive points topped with a Kerley kill put LMU ahead 23-16 before a pair of Sharfenaker kills brought a close to the first set.

The Railsplitters continued their hot hitting in the second set, totaling 13 kills behind a .458 attack. Winning six of the first seven points of the set, LMU took a 17-10 lead on a Sharfenaker kill and led 21-14 after two Tusculum errors. Following three-straight Pioneer points, a Tusculum service error and attack error preceded an ace from senior middle hitter Pedro Carvalho and a set-clinching kill by Kerley.

Despite a tighter third set, the Railsplitters limited the Pioneers to a .069 attack as LMU claimed 12 kills off a .222 attack. Trailing 6-3 in the early going, the Railsplitters found themselves down by four at 9-5 before a 5-1 run capped with a block from Carvalho and Sharfenaker knotted things up at 10. Kerley then closed out an 8-3 Railsplitter run with a kill to give LMU an 18-15 advantage. With the score deadlocked at 20-20, the Railsplitters rattled off five-straight points to finish the match with the help of a Tusculum error, back-to-back Sharfenaker kills, a Sharfenaker and Carvalho block and an ace on match point from sophomore outside hitter Jacob Titus.

Dane Loup led the way for the Pioneers with eight kills and Tusculum got 25 assists and seven digs from Lucas Blanco.

Up Next
The Railsplitters will have a week off from match action before hosting Limestone University next Friday, March 26. First serve from Harrogate is slated for 7 p.m.