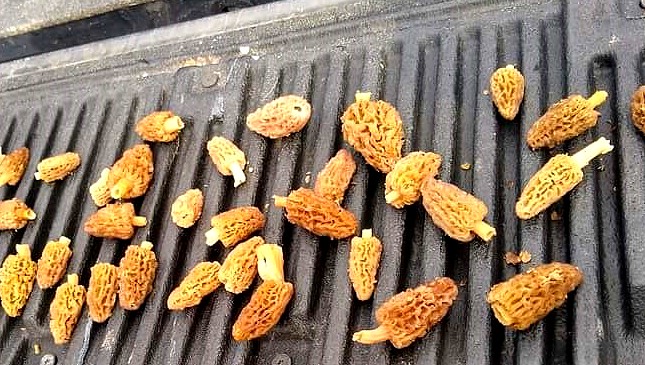 They have many nicknames but no matter what you may call them, morels are delicious and highly sought after.

According to fungi experts, morels are Morchella and scientifically belong to a genus of edible sac fungi closely related to anatomically simpler cup fungi in the order Pezizales.

These distinctive fungi are hollow and have a honeycomb appearance due to the network of ridges with pits composing their caps. Morels are prized by gourmet cooks and many East Tennessee families alike.

They need 50-60 degree soil temperatures to thrive and love to grow in disturbed ground, clear cuts and wildfire burns.

“Morels are often found near trees, but not just any tree,” explains Joe Lacefield (KentuckyFish and Game). He is a wildlife biologist who is an expert on the topic.

“If you want to find morels, learn to identify trees: sycamore, hickory, ash, and elm are four to focus on first. Morels favor fruit trees, too. “An old apple orchard is often a productive area,” Lacefield said.

Another tip hunters use is to look on southward and southwest facing slopes where the soil temperatures tend to be more favorable for growth.

As far as taste, size doesn’t matter but some say the darker the morel the more earthly or nutty it will taste.

One of the biggest reasons people like to go out and hunt morels is because they are so hard to confuse with anything that will make you sick.

However, the only mushroom that resembles a morel is a fake morel. The cap is wrinkled and the stem is solid not hollow, remember that.

Before you go out on your own hunting for morels get with a veteran hunter and let them show you how to hunt and what to avoid.

As mentioned, the morel is a favorite of cooks all over and as such a true morel is only grown in the wild and will fetch a hefty price when sold.

Many chefs will pay over $20 per pound for morels.

Remember what veteran hunters say, “If you find one, stop and look around because they rarely grow alone.”