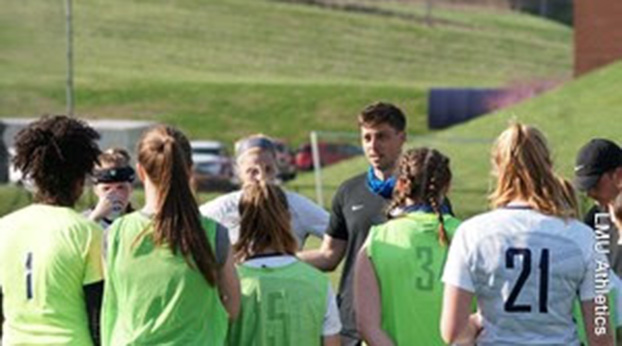 ROCK HILL, S.C. – Fresh off one of the most successful head coaching debuts in school history, the Lincoln Memorial University women’s soccer program was rewarded for its stellar 2021 season on Tuesday afternoon, as five players landed All-South Atlantic Conference recognition, league officials declared the day after the SAC Tournament Quarterfinals.

Landing half of the all-conference first team forward spots next to one second-team honoree defender and two honorable mentions, the Lady Railsplitters (4-1-2) placed the fourth-highest number of representatives in the All-SAC list. Classmates Jessica Cravero and Rachel Taylor led the way with their first-team selections, as junior Fabienne Loetscher garnered a spot on the second-team roster. Sydney Wolfenbarger and newcomer Merel Houweling rounded out the list of LMU performers to be named all-league on Tuesday, both being named to the Honorable Mention categories.

One of the most potent strikers in Lincoln Memorial history, Cravero continued her status as one of the Lady Railsplitters’ most reliable weapons in 2021, tying Taylor for the most goals on the team through seven matches, finding the back of the net five times next to one assist for 11 points. The junior Italian posted the highest number of shots on the roster at 43, accumulating a shot-on-goal percentage of 0.349 to bring her personal career goal tally to 42, enough for 3rd place all-time in the LMU record books. Producing one goal in five different appearances this season, Cravero served as an integral piece of the Lady Railsplitters’ first-place finish in Pod 3 and third seed accomplishment.

Stepping up several notches in 2021 to form a two-headed attacking machine alongside Cravero, Rachel Taylor recorded her most impressive campaign as a junior this spring, matching her All-SAC first team mate with five goals, one assist, and 11 points overall. Hitting the highest shot-on-goal clip of any other player on the roster this year, Taylor’s 0.429 percentage in that category turned opposing teams’ defensive units into scramble mode on more than one occasion, including the game-winning strike with just 24 seconds remaining in double overtime to defeat Carson-Newman in the season-opener in Jefferson City. Just over one month later, Taylor recorded her third career multi-goal performance in another 2-1 thriller over the Eagles to help the blue and gray host their first SAC Tournament bout in three years.

Starting in all seven contests throughout the semester, Loetscher was again commended for her astounding work on the defensive side of the field with an all-conference second-team christening, aiding an LMU defense that only surrendered seven goals all year. The SAC Quarterfinal meeting against Limestone on Monday served as the only time all season that the Lady Railsplitters allowed more than one goal in a single match, while the defensive highlight of the spring for Loetscher and the defense came in a road shutout over Mars Hill on March 26th.

Similar to the pairing of Cravero and Taylor on the offensive end, Sydney Wolfenbarger and Loetscher asserted themselves as a formidable backline in 2021, where the Seymour, Tenn. native grabbed an all-league honorable mention tab for the first time in her career. Wolfenbarger’s sophomore stint proved even more productive than her debut campaign, limiting opposing teams to below-average offensive numbers. Over seven matches this season, the Lady Railsplitters outperformed their opposition in shot attempts all but twice on their way to becoming the only team without an outright loss entering the SAC Tournament.

Leading the way in the assist category as a freshman, Houweling started every outing for the blue and gray during her debut campaign, earning an all-conference honorable mention selection alongside Wolfenbarger. One of eight foreigners on Head Coach Matthew Carr‘s roster, Houweling, a native of the Netherlands, completed a shot-on-goal percentage of .400 while dishing out two consecutive assists in the season-opening barnburner over C-N. In the running for one of the most consistent first-year players in the South Atlantic Conference, Houweling finishes off the list of the five Lady Railsplitters named all-conference worthy performers, with all five of them set to return for the fall 2021 stretch.

While LMU’s season may have ended prematurely in the Conference Quarterfinal round, expectations will be very high for Coach Carr’s unit next season with the number of high-level returners set to come back. The full list of Tuesday’s all-SAC selections can be found below: