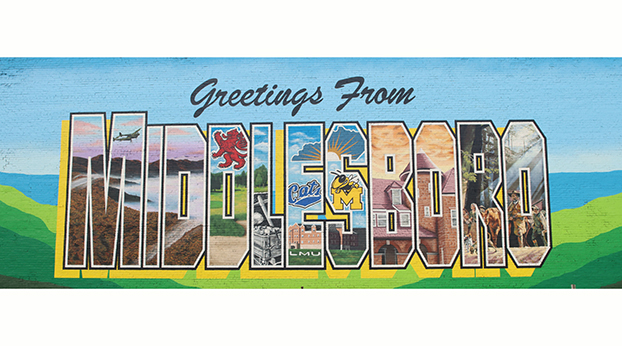 A wide variety of shops and restaurants provide everything from daily necessities and a quick and inexpensive meal, to higher-end goods, services, and fine dining all at locally-owned businesses. People travel from miles around to be part of the fun and excitement downtown has to provide.

Listed below are some of the highlights of the downtown area of Middlesboro:

American Association Building
This building served as headquarters for the American Association from 1891 until the 1950s. The building was badly damaged by a fire in 1997. Later the building was restored. Today artifacts are on display recognizing Alexander Arthur and his role in founding Middlesboro. Bell County Tourism have their office and visitors center here. The museum and Victorian Garden are open to the public.

Historic Canal Walk
The Canal was built between 1889 and 1891 to provide drainage for the city. Italian workmen undertook the construction. Originally the canal was lined with wooden planks of which a few can still be found. A paved Canal Walk is open to the public.
Centennial Park and Veterans Wall
At 21st Street between the Centennial Park and City Hall are memorials with the names of veterans from the Korean War, Vietnam, and Desert Storm. Also along the wall are panels describing the history of Middlesborough. These were erected to commemorate the city’s centennial in the 1990s.

Coal House and Coal Museum
The Coal House was built in 1926, utilizing 42 tons of bituminous coal taken from mines in our area. The Bell County Chamber of Commerce has its offices there today. Next to it is an outdoor museum showcasing mining tools and equipment.

U.S. Post Office
This Classical Revival building was constructed in 1915. The façade has the appearance of a Classical Greek temple. Eight Doric columns with fluting are enframed within the front wall. A decorative frieze rests atop the columns.

Bell County Historical Society and Museum
This building was originally a Carnegie Library built in 1912. Today the museum here has exhibits from all periods of the area’s past. Special exhibits showcase the meteor crater, life in Appalachia, the Victorian era, the birth of ragtime music, hometown boy and TV movie star Lee Majors, and local industries and businesses. The museum also has a research library with an emphasis on local history and genealogy.

Exhibition Hall and Library
Built in 1889 by the American Association, Ltd., to showcase the natural resources of the area, it later served as a high school and now houses the Masonic Hall.

Edgewood Court (Site of The Middlesborough Hotel)
A fine four-story high hotel was built here in 1889 and enlarged in 1890. The main porch faced east and had excellent views of Cumberland Gap. Other buildings included hitching sheds and service buildings to the west. The hotel had an annex called the Occonita Club that was reached by a “skyway” built over Edgewood Road. While many of these buildings are long gone, portions of their foundations remain.

Cumberland Manor Bed & Breakfast
The Carey-Easton Home was built during the initial boom period. Tudor detailing on the front facade is distinctively English in appearance. A Craftsman-style brick porch was added in the early 1900s. The interior has ample rooms on the ground floor with beautiful wood molding and other decorative features including stained glass, fireplaces, and extensive historical antiques and furnishings. Today this is the Cumberland Manor Bed and Breakfast.

A.D. Campbell’s
This building is an excellent example of late 19th century commercial architecture and one of the only buildings downtown with an original storefront. The A.D. Campbell’s clothing store has been in business at this location since 1889.

Central Block
This Victorian Romanesque building has rough-finished stone coursing and terra cotta tile. The building is organized into five bays with a central entrance and piers that go through roof level. Similar piers are to either side. Fanciful sunburst windows over round-arched windows have great preservation potential.

Benevolent and Protective Order of Elks Home
Originally built as an Elks Home, ca. 1911, it later became a hospital during the flu epidemic of 1919. Hospital use continued until 1956. Several floors had residential use as late as the 1980s. Today work is underway to preserve the building.

Adams Building
Built in 1890, this building originally housed the Palace Saloon. After the town went dry in 1915, this became a men’s store.

Park Theater
O.G. Roaden opened the Park Theatre in October 1947. William Price Coomer had taken over ownership by 1953. David Pitts, an evangelist from Louisville, began holding religious services for his “Calvary Temple Church” here starting in the 1960s. By the 1970s the Park was in trouble. A classified ad in April 20, 1974, Middlesboro Daily News listed 200 “theater type seats for sale at $1 apiece. The Jaycees continued to manage the theater for a few years more before it was closed altogether around the time of the opening of the Middlesboro Mall.

Arthur Building
Built in 1890 by the founder of Middlesborough, it has a crest designed by the Arthur family over the door. During the “boom” era, the lot sold for more than a comparable lot cost in downtown Manhattan.

Weinstein Building
Built in 1906, this housed one of many mercantile businesses started by the large Jewish population that immigrated to Middlesborough in its “boom” days. The building served as a department store for many years and was a J.C. Penney’s at one time.

Boone Trace
Daniel Boone passed through this way on his journey westward in 1775. After crossing the Yellow Creek near the present-day location of Kentucky Fried Chicken, he is thought to have passed through this area. A portion of the Wilderness Road remains at the end of 17th Street on the east side of the railroad track.

1938 WPA Bridge
The Works Progress Administration was a Federal program during the Great Depression designed to provide jobs and make public improvements. A concrete bridge south of Ashbury Street east of 17th St has the inscription “W.P.A. 1938.”

J.R. Hoe & Sons
One of the city’s original industries, the Pioneer Iron Works, originated at this location. The company was bought by the Hoe family and has continued to be operated by members of the family for over 100 years. This is one of only a few foundries remaining nationally still doing custom iron work.

Colson House
This is a brick structure that was originally constructed around 1800. When built the house faced the Wilderness Road that passed through Middlesboro. At some later time the brick was covered in stucco and a front porch was added.

Colson/Middlesborough Cemetery
This hilltop cemetery with commanding views of the Cumberland Gap is the burial place of Alexander Arthur and many of the town’s earliest settlers.

Middlesborough Airport
This airport has a 3,650-foot runway that was built in 1921. It is the second oldest airport in Kentucky. At one time it was the home of the P-38 “Glacier Girl” that was recovered from Greenland from under 268 feet of ice, brought to Middlesboro, and fully restored.

Jewish Cemetery
Middlesborough once had a sizable Jewish population. After the initial boom passed, many members of the Jewish community decided to stay on. Members of families by the names of Horr, Ginsberg, Euster, Goodfriend, and many others lived, worked, and were eventually buried in Middlesboro. Famous among these was Jack Zuta who immigrated from Russia between 1903 and 1905. Zuta was involved with several saloons in Middlesboro. After the town went dry in 1915 he moved to Chicago. As he gained influence there, he became known as Al Capone’s arch-rival. He was gunned down gangland-style at the Lake View Resort Hotel near Delafield, Wisconsin. His body was brought back to Middlesborough and buried in the Jewish Cemetery.