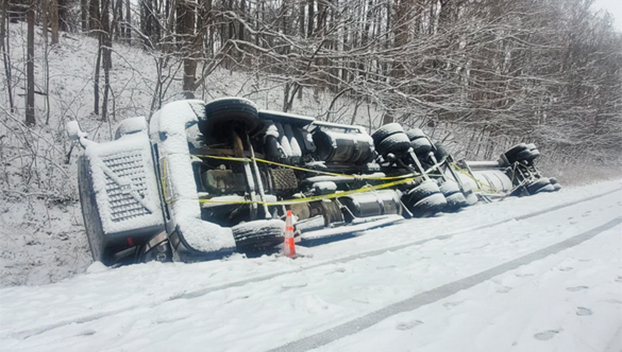 A large snowstorm brought significant accumulation to Nashville, Tennessee, on Thursday, marking the snowiest day in years. Nashville reported 6.3 inches of snow, making it the city’s snowiest day since Jan. 22, 2016, when 8 inches of snow fell. This also set a new snowfall record for Jan. 6, burying the previous record of 4.0 inches set in 1977.

This storm alone gave Nashville the snowiest winter since 2015-16 when 11.3 inches accumulated throughout the season.

Crashes were also reported on Interstate 24, 40 and 65, leaving drivers stranded on the snow-packed roads. The Nashville Department of Transportation warned against travel unless absolutely necessary.

Traffic stalled on Interstate 40 when multiple semi-trailer trucks were unable to make it up a hill, according to Rebekah Hammonds, the community relations officer for the Tennessee Department of Transportation. Crews worked to push the semis up the hill, opening a lane and allowing traffic to move again.

Interstate 40 had another slow down just after 3 p.m. when a semi jackknifed on the westbound side in Wilson, Tennessee.

The snow did not discourage some visitors from still taking to the streets to visit businesses and tourist attractions in Nashville that remained open, including Lynne Darlington, who was visiting form New York.

“I wanted to go to the Country Music Hall of Fame, so we walked to the doors. In New York, that would never be closed on a day like today,” Darlington told AccuWeather National News Reporter Kim Leoffler.

Darlington’s cowboy hat was picking up some snow accumulation as she spoke with Leoffler and added that it was disappointing that the Country Music Hall of Fame was closed, but was still enjoying her time in the city.

In Kentucky, a pileup crash occurred on Interstate 64 near Mount Sterling on Thursday afternoon. Mount Sterling Police and Montgomery County Sheriff David Charles said that up to 100 vehicles were involved. The crash involved injuries with some being serious, according to WTVQ.

Kentucky Gov. Andy Beshear deployed the National Guard to help state police with accidents on the roads. Beshear also declared a state of emergency following the storm’s dangerous impacts on the state.

Kentucky reported over half a foot of snow in many areas with some topping out at or above 8 inches, including Lexington which received nearly 10 inches. As a result, several areas in the state experienced slick and snow-covered roads. Snow fell as fast as 1 to 2 inches per hour in many areas of the state.

Thursday’s snowfall in Lexington also set a new daily record. The 9.9 inches of snow that fell topped the old record of 9.5 inches from 1910.

“When it is snowing that fast, despite the best efforts of road crews, it is hard to keep up with the accumulation and keep roads clear of snow,” said AccuWeather Chief Meteorologist Jonathan Porter. “Highway chaos can quickly ensue with the risk for roads to be clogged by stranded vehicles and crashes.”

The snow departed the region by Friday morning as the winter storm shifted over the Northeast. Frigid conditions replaced the snowy weather with bone-chilling temperatures.

On Thursday night, the AccuWeather RealFeel® Temperature bottomed out at 9 F in Memphis, Tennessee, 4 F in Nashville, and below 0 F across much of Kentucky. Temperatures are predicted to rebound over the weekend which will help to melt some of the snow that fell across the Tennessee Valley.