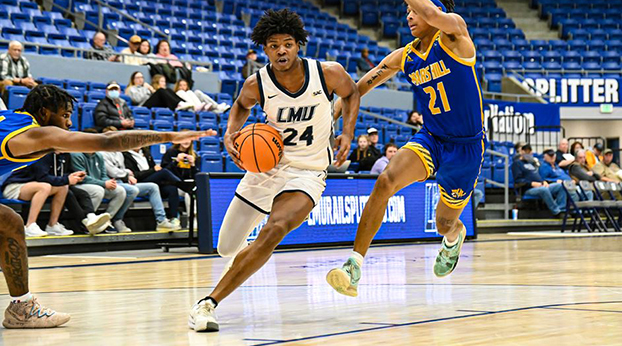 Backed by a combined 42 points from Me’Kell Burries and Matthew Sells, the Lincoln Memorial University men’s basketball program cruised to a 100-54 win over Mars Hill on Monday evening inside Tex Turner Arena.

Dominating the glass as always, Lincoln Memorial pulled down 51 rebounds in the contest with junior Jordan Guest leading the way with 12 total boards. Junior Martez Brown followed suit as he pulled in 11 boards.

Jumping out to an 11-2 lead early, Lincoln Memorial controlled to contest from the opening tip. Mars Hill got back to within four. The Railsplitters then broke out on multiple runs to extend their lead, going up 49-24 at the half.

Burries and Sells paved the way for the victory as both players recorded 21 points each. Sells went 7-of-10 in the contest, with all shots coming from beyond the arc. Burries tacked on eight rebounds and five assists to his stat line.

Guest tallied his sixth double-double of the season with 12 points and 12 rebounds. Redshirt sophomore Chase Rankin continued to be a dominant force across the court as he recorded a 16 point, seven-rebound and five-assist effort in the win.

The Railsplitters will travel north to UVA Wise to face the Cavaliers on Wednesday, February 9th with a 6:00 p.m. tip-off.