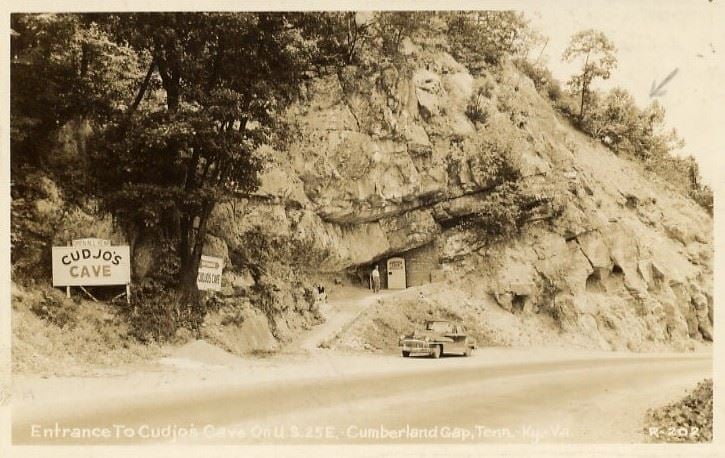 Cudjo’s Cave (now known as Gap Cave) was once a stopping off point for travelers and locals alike. While tourists perused Cudjo’s Souvenir & Gift Shop, situated across the roadway from the cave, others stood nearby their vehicles to capture a birds-eye view of the Cumberland Gap and its lush foliage high atop “the mountain.” Shown is an old post card most likely purchased inside the popular gift shop.

My first experience of ‘climbing the mountain’ occurred not long after marrying a native of the Little Sycamore community of Claiborne County. I was used to maneuvering hills but traversing this section of the majestic outcropping known as the Cumberland Mountains was something special.

With the proverbial pedal to the metal, we hit the top of the mountain pass, downshifted to a crawl and pulled into an empty parking space.

Reaching the top by the north side of the mountain pass, I saw sitting to the right of the road the sweetest log cabin with a sign emblazoned Cudjo’s Souvenir & Gift Shop. A smaller sign attached to the outside of the building declared “Cave tour tickets sold here.”

Of course, we just had to make the one and a half-mile cave exploration. Even though my husband had been there, done that multiple times, he acquiesced. I recall him enjoying it just as much as I did. Maybe the tour reminded him of the significance of this little jewel sitting atop the mountain. Maybe, he was just making his new wife happy.

Our readers were recently asked on the Claiborne Progress Facebook page to post their memories of “going ‘cross the mountain.” There was quite the response.

Vic Graves recalled being inside the cave several times.

“I always liked going in the gift store and looking at them cigars big as a three inch pvc pipe. Then, would stop in Cumberland Gap and get a drink of water at the water fountain before you went under the railroad trestle. Oh! the memories.”

Michelle Hackworth said in her comment just how much she loved the cave.

“I remember as a little girl going through the cave with my Mom and sister (Dad waited in the car). The gift shop was really cool, too.”

Sandy Casteel Combs recalled traveling from Ohio to visit her grandparents in Tennessee. “We always knew we were getting close to their house when we passed Cudjo’s. I’ve been in the cave two times in my 56 years. My dad used to buy cigarettes for the guys he worked with in Ohio. I miss the good ole days. I live here in Tennessee now. I love it.”

“I loved to look at all the souvenirs in the gift shop.”

Debra Layne said in her comment that she always dreaded going over what became locally known as “Massacre Mountain.”

Carla Cline recalled her “mamaw” saying she would never go to Tennessee but how she would relent just once a month to purchase her tobacco products at the gift shop.

A few adventures were reportedly had at the cave, according to some who commented on the post. Roger Moyers recalled an incident.

“Me and another guy who shall remain unnamed parked in the Gap, walked up the creek in through the culvert with water running through it, under the road and up into the cave – had to hide when a tour group came through. Young and dumb,” said Moyers.

Jerry Chumley spoke of an adventure he feels fortunate to have missed.

“In 1972, me and three other boys were playing hooky from school and climbed all over that mountain and found another entrance. When they wanted to go in, I ran off and went home. They did go in and robbed the wishing well and stuffed the money into their pockets and left walking on old 25E and a cop stopped them and then a call came over the radio that the cave had been robbed. He noticed the bulging pockets and arrested them. (So glad I went home). They had to join the Army to get out of it,” said Chumley.

Noted land explorer Dr. Thomas Walker named his discovery Cave Gap in 1750 and christened the river north of the pass the Cumberland River after the Duke of Cumberland, the son of Britain’s King George II who had funded his exploration.

“Cudjo’s Cave,” a popular novel of its time followed the fictitious adventures of a slave who had escaped and hid for a time in a cavern in the Cumberland Gap area. The book inspired the cave owners of the time to rename the cave hoping to attract tourists.

Commercial tours began in the late 1890s. In March of 1920, Lincoln Memorial University bought the caverns and surrounding land from private owners, eventually reopening the attraction to the public in 1934.

The Commonwealth of Virginia received title to the cave in 1947. The National Park Service began offering tours in 1992.

The old roadway leading up Massacre Mountain was demolished a few years later when the Cumberland Gap Tunnel was completed. Passing through a bored out hole through the mountain replaced the high adventure of passing over it.  But, the memories of Cudjo’s Cave and the sweet log cabin that housed the Souvenir & Gift Shop remain intact in our collective memories.