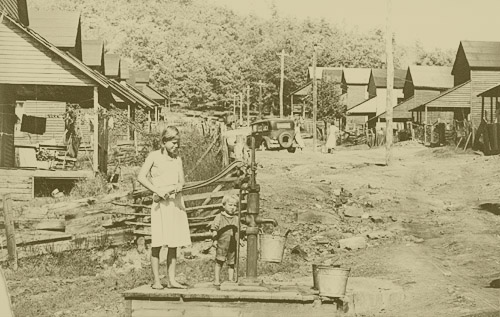 Wilder once was a classic coal mining town. Photo submitted

If you clear away the weeds, you can find the tombstone in the corner of the remote cemetery.

Barney Graham, it claims, is “gone but not forgotten.”

Eighty-nine years after his murder, I fear he has been forgotten – along with the mining community called Wilder that is synonymous with his name.

If you’ve driven through this corner of Fentress County lately, you will attest to the fact that there isn’t much to Wilder anymore except for a tiny post office and a couple of abandoned houses. There’s no indication of the remarkable events that occurred here during the Depression.

Wilder used to be coal country. In the early part of the 20th century, people mined coal here and transported it by train along the Tennessee Central Railroad to Nashville. The Fentress Coal and Coke Co., as the business was called, owned Wilder – every house, every store. It was a classic coal mining town, where people were paid with “scrip” and where everything they bought was owned by the company.

By the outbreak of the Great Depression about 700 people lived in Wilder –most of them in tiny shacks with no running water.

When the Great Depression hit, the Fentress Coal and Coke lowered wages. In July 1932, workers organized a chapter of the United Mine Workers and went on strike, protesting low pay and working conditions. The owners of Fentress Coal and Coke hired replacement workers to keep the mines producing and trains moving. Some of these workers were from other parts of Fentress County or from nearby counties such as Morgan and Overton. It wasn’t uncommon for a striker to recognize his brother, or cousin, among the scabs.

“There was a lot of shooting and a lot of explosions. Scabs and strikers were being shot at.

Several killed and a lot of them got wounded . . . I can remember a lot of times walking into town and seeing 50-75 men carrying pistols.”

In November 1932, on three occasions, railroad bridges leading to Wilder were blown up.

By this time several newspapers had reporters in Wilder, and most were sympathetic to the striking workers. When news spread across the county that people in Wilder were starving, people began donating money, food and medicine to their cause.

Barney Graham was the leader of the strikers, and by the spring of 1933 there were rumors his life was in danger. Among the people who heard these rumors was Myles Horton, a union organizer who had founded the Highlander Folk School in Grundy County less than a year earlier. According to Horton’s autobiography, he told Graham that there were people out to get him, and advised him to lay low. Graham refused to do so.

On April 30, 1933, people in Wilder heard a series of gunshots. When they came out of their homes, they saw Barney Graham lying on the ground in front of the company store, bullet holes all over his body. Among the company guards with weapons pointed at him were Jack “Shorty” Green.

Barney Graham’s murder, and his funeral, were big news. “The grand jury studied the slaying of Barney Graham today as his friends, 600 of them, marched two by two behind the coffin of their slain leader in a parade through Wilder, over the spot where he met his death,” UPI reported.

No one was ever convicted for Graham’s murder. Green, who is assumed by historians to have been the murderer, claimed he killed Graham in self defense. But according to an examining physician, four of Graham’s ten bullet wounds were in his back.

After the excitement of Graham’s murder passed, the strike appears to have lost strength. The scabs became permanent, many of the striking workers decided to go back to work despite the low pay, while many of them simply left.

Coal mining remained in Wilder through the 1960s, but since that time it has vanished, and the railroad no longer even goes through that part of the county. When engineers rebuilt Highway 85, they bypassed what some refer to as “Old Wilder.” The closest thing to a main street that Wilder used to have is now covered over by trees, as are the foundations of its old shacks.

In Horton’s biography, he says that Graham’s murder and the way it was covered up by local authorities made him all the more certain that his Highlander Folk School would be a radical institution. That it was, promoting organized labor in the 1930s and 1940s and shifting its focus to civil rights in the 1950s. And among the many people who attended workshops at Highlander were Rosa Parks and Martin Luther King Jr.