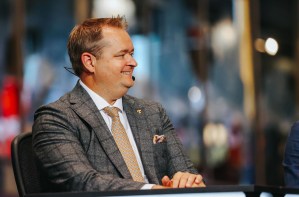 Young played in 11 games with eight starts in his first FBS season last fall and tied with Banks for the team lead in sacks (5.5) and tackles for loss (11.5). He ranked second among UT defensive linemen with 46 total tackles on the year, including 20 solo, and led the squad with eight QB hurries.

A member of the Maxwell Award and Davey O’Brien Award preseason watch lists, Hooker returns for his sixth and final season of college football in 2022. The Greensboro, North Carolina, native racked up 3,561 yards of total offense last fall, which ranked fourth in the SEC and fourth in UT single-season history. He shattered single-season program records for passing efficiency (181.4) and completion percentage (68.0) and totaled 31 passing touchdowns to just three interceptions.

Coming off a breakout junior campaign in 2021, Tillman emerged as one of the SEC’s best playmakers last fall. The 2022 Biletnikoff Award candidate finished the year with 64 catches for 1,081 yards and 12 touchdowns and caught a TD pass in a school-record seven consecutive games to end the season.

Wright started all 13 games in 2021 at left tackle and saw action on a team-high snap count of 922 on the season. He blocked for a Tennessee offense that set program record for points scored (511) and total offense (6,174 yards).

Mays also stood out for UT’s offensive line last fall, playing and starting at center in eight games during Josh Heupel’s first season with the program. The local product battled injury early in the year but started the final six games of the season, not allowing a sack over the final five contests of the 2021 campaign.

Returning as one of the nation’s leading tacklers this year, Banks produced one of the best seasons by a linebacker in school history in 2021. He led the team, ranked second in the SEC and tied for the seventh in the nation with 128 total tackles (59 solo, 69 assisted). His 9.85 tackles per game were good for 12th in the nation, while his 128 total tackles were the most by a Vol since A.J. Johnson logged 138 in 2012.

An Atlanta native entering his senior season, Flowers will serves as the Vols’ starting safety for the third straight year. He has appeared in 35 games with 25 starts and recorded 170 tackles, three interceptions and 10 pass breakups. He ranked sixth among SEC defensive backs with a career-best 82 tackles a year ago.

Heading into his fourth straight season as Tennessee’s starting punter, Brooks has played in 48 career games. He averages 43.3 yards per punt for his career, which ranks third all-time in UT history. Thirty of his punts have gone 50-plus yards, and 47 of his punts have been pinned inside the 20.