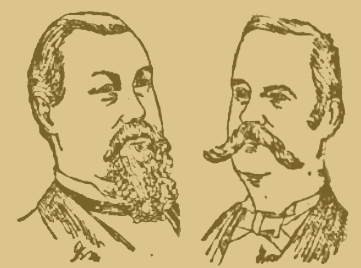 Goodloe was from an aristocratic family while Swope had a humble upbringing.

As young men they became attorneys and desirous of becoming leaders in the Republican party in Kentucky. Resentment between the two men grew and it heightened when President Chester A. Arthur appointed Swope to the position of Internal Revenue Collector, resulting in his move to Lexington.

They met at various political gatherings including a stormy Republican State Convention in Louisville, May 1, 1888. The purpose of the meeting was to appoint delegates to the National Convention coming up in Chicago. Swope and Goodloe were again at odds.

A Pulaski county delegate stood and protested against his county casting their vote for Col. Swope as he had moved to Fayette County and was no longer a county resident.

“I don’t want your vote,” Swope retorted. “Don’t do like my county did, instructing delegates to vote for one man and then voting for another.”

Col. Goodloe, Swope’s nemesis replied, “I think it is ill words coming from the gentleman from Fayette County to complain of his treatment at the hands of the delegates, as twenty-one out of twenty-three Fayette County delegates don’t speak to him when meeting on the street and nine-tenths of the republicans in Lexington won’t speak to him.”

Swope was much offended by the statement and sought out Goodloe at his hotel without finding him. He was persistent and located him the following month at the Phoenix Hotel in Lexington, denouncing him bitterly. “I will not fight you because I know you are armed and I am not,” Goodloe replied.

Swope removed his coat and turned his pockets inside out in an effort to convince Swope that he was not armed. The two men broke off the meeting with the understanding they would meet again, each man arming himself for the encounter.

Col. William Cassius Goodloe was the nephew of Marcellus Cassius Clay, Kentucky politician, minister to Russia and prominent anti-slavery crusader. Clay gave his Bowie knife to his nephew with the admonition, “If you don’t use this on Swope the next time you see him you are not a Clay.” The elder Clay used the knife a few years earlier to fend off six brothers, killing one, who attacked him while he was making a speech for the emancipation of slaves.

Several friends of Goodloe and Swope, with the interest of the people at heart, talked with them individually and received permission to intervene in their behalf. Swope and Goodloe selected two men each as their representatives and in a meeting decided the two combatants should discontinue the offensive language they were using against each other.

At their suggestion Col. Swope wrote a formal message in which he withdrew the statement that raised Goodloe’s ire at the hotel. Col. Goodloe, in turn, wrote one withdrawing his utterance at the Louisville Republican Convention. Both of the men continued carrying arms however. Swope carried a Smith & Wesson revolver while Goodloe carried his uncle’s Bowie knife, in that attacks by honorable men almost always come at close range.

Things went well for a while but it was actually a lull before the storm.

The two had a deadly meeting the following year. Col. Swope told an associate several days before that he still feared that an encounter between the two would bring death to one of them.

“If it should happen, I prefer to be the one slain rather than be the slayer,” he said. “Goodloe has a large family that is dependent on him. I don’t have anyone.”

“You are obstructing me from getting my mail,” he soon said sarcastically after waiting, perhaps unnoticed, by Col. Swope.

Editor’s note: Swope and Goodloe, both armed and dangerous react aggressively in the conclusion next week. Jadon Gibson is a freelance writer from Harrogate, Tennessee. Don’t miss a single segment!